Jay's brother Abed is our unofficial tourist guide. He and his wife Deena are the only people here that love to travel and explore as much as we do.
Friday November 15 we had one goal in mind. To head north. When you live in Israel, life is centered around Tel Aviv, and the Beaches. You forget that an entire world exists up north. Now let me explain something. Israel is small. Much much smaller than you can imagine, and when you look at maps and see the thousands of towns, you must think Israel is a fairly large country. Wrong. We live on the border of the Westbank. For us to drive through the crooked and windy roads to get to the beach, it takes about 25-35 minutes, 12.5 km.

We used to commute daily IN the city a minimum of 25 minutes on the highway. I used to drive 35 minutes each way to work and people were jealous! When you say you are going to Gan Shmuel, a local shopping mall, people think it's sooo far to drive! It takes 15-20 minutes to get there. To get to Tel Aviv, it's about 90 minutes.
So for us to take a day trip up north, not many people are willing to take that on. To go from our house to the farthest point in Israel, north, you are looking at a 2 hour drive. Maximum.
We started out at 9:30 and aimed our cars for the Golan Heights. Let me say that there is NO danger driving to this area. You honestly have no idea that it's any different than driving around the rest of Israel. I saw no military, in fact less than where we live. We are right on that dotted line closish to Hadera.

Our first stop was just past Nir David. It was a nice little park setting with the clearest stream running through it that I have ever seen. It ran so smoothly that you could hardly see any ripples in the water. There were lots of little fish that loved fighting over nibblets of bread. Lena decided to do some climbing of the huge Eucalyptus trees that are all over Israel. 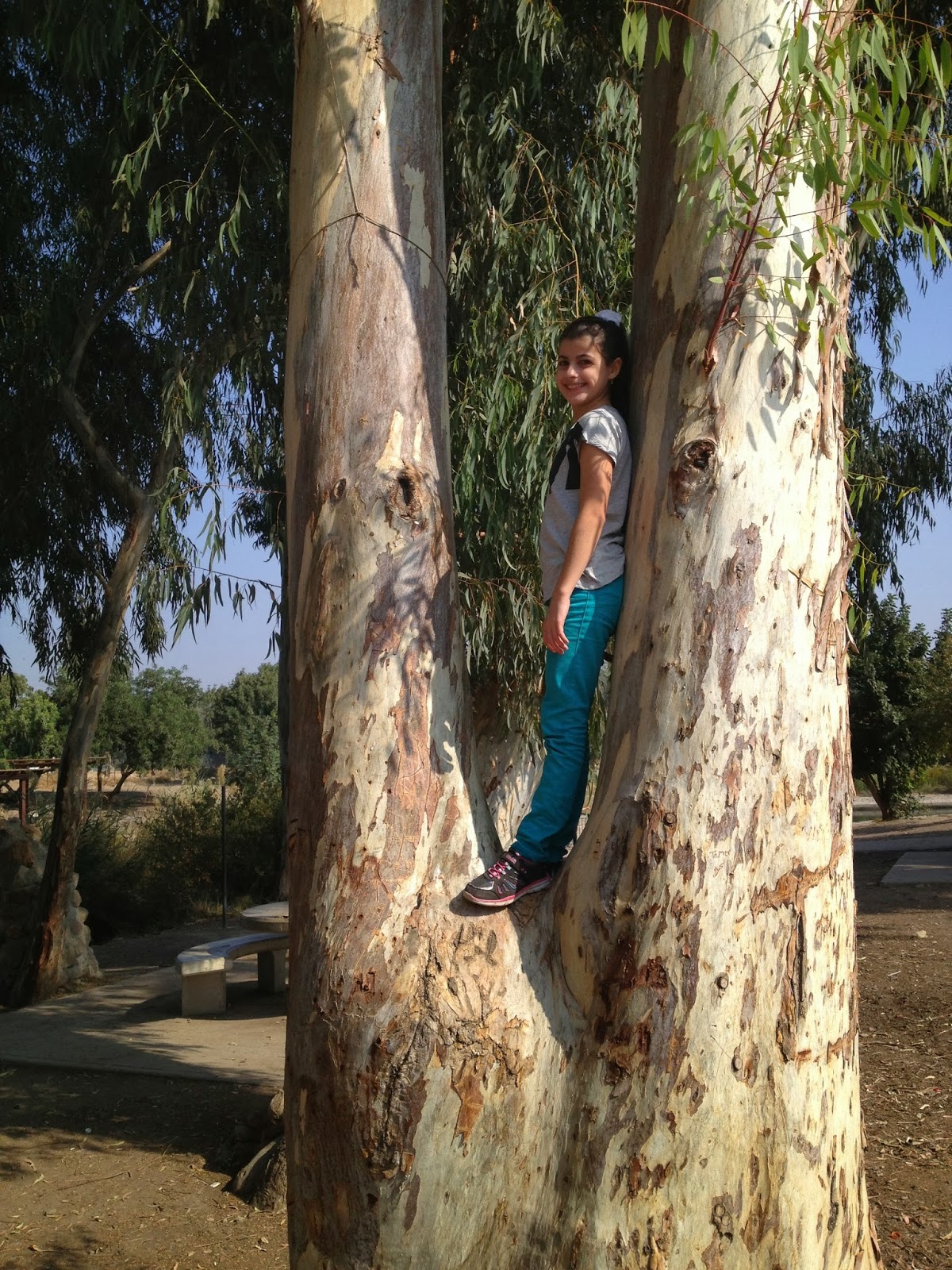 We hit the road again and began our journey up a mountain that straddles Israel, Jordan and Syria. See map here. It is dotted with bunkers from the 1967 war, signs announcing area's you can not enter due to possible unexploded land mines.Yikes! 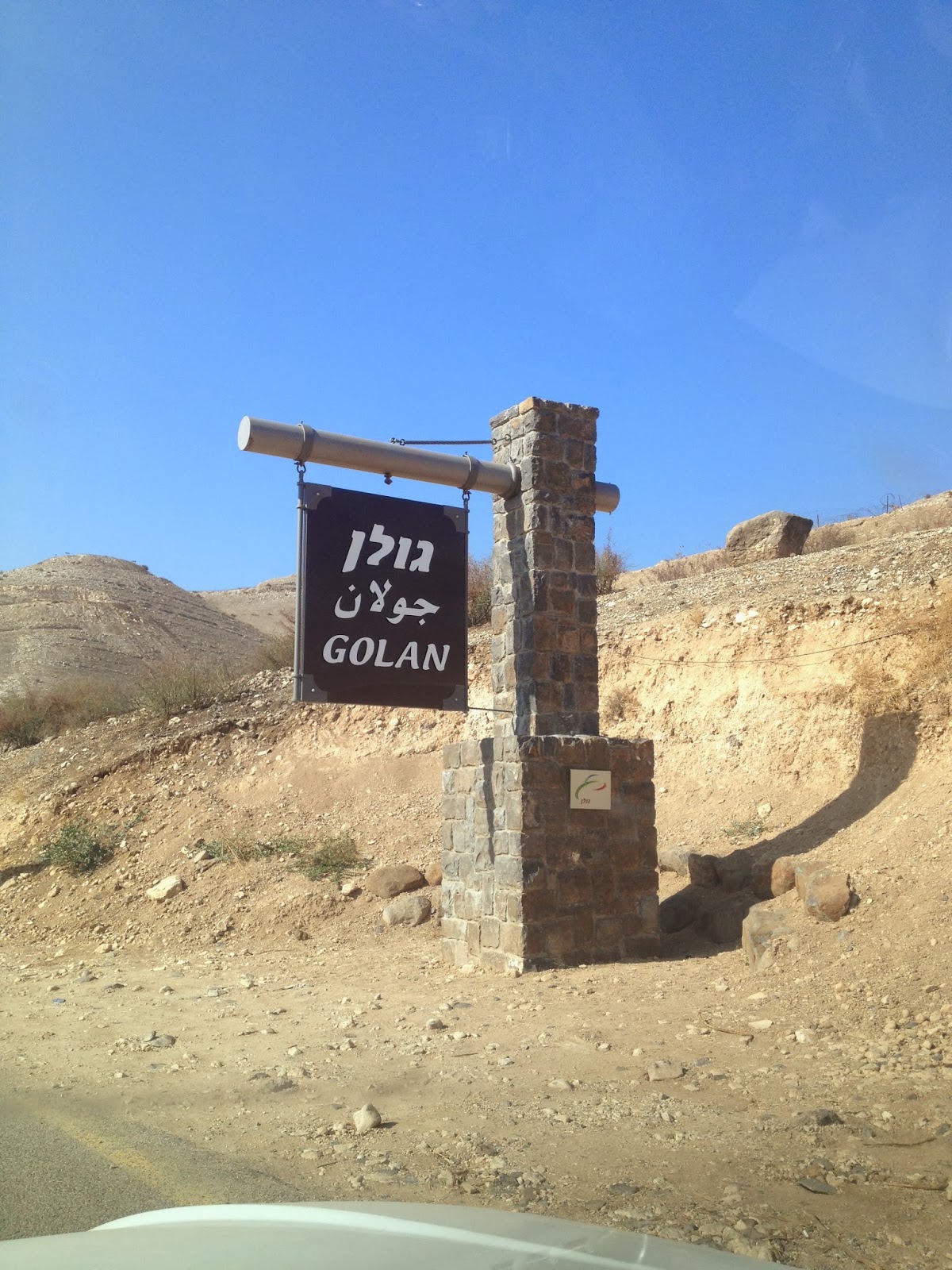 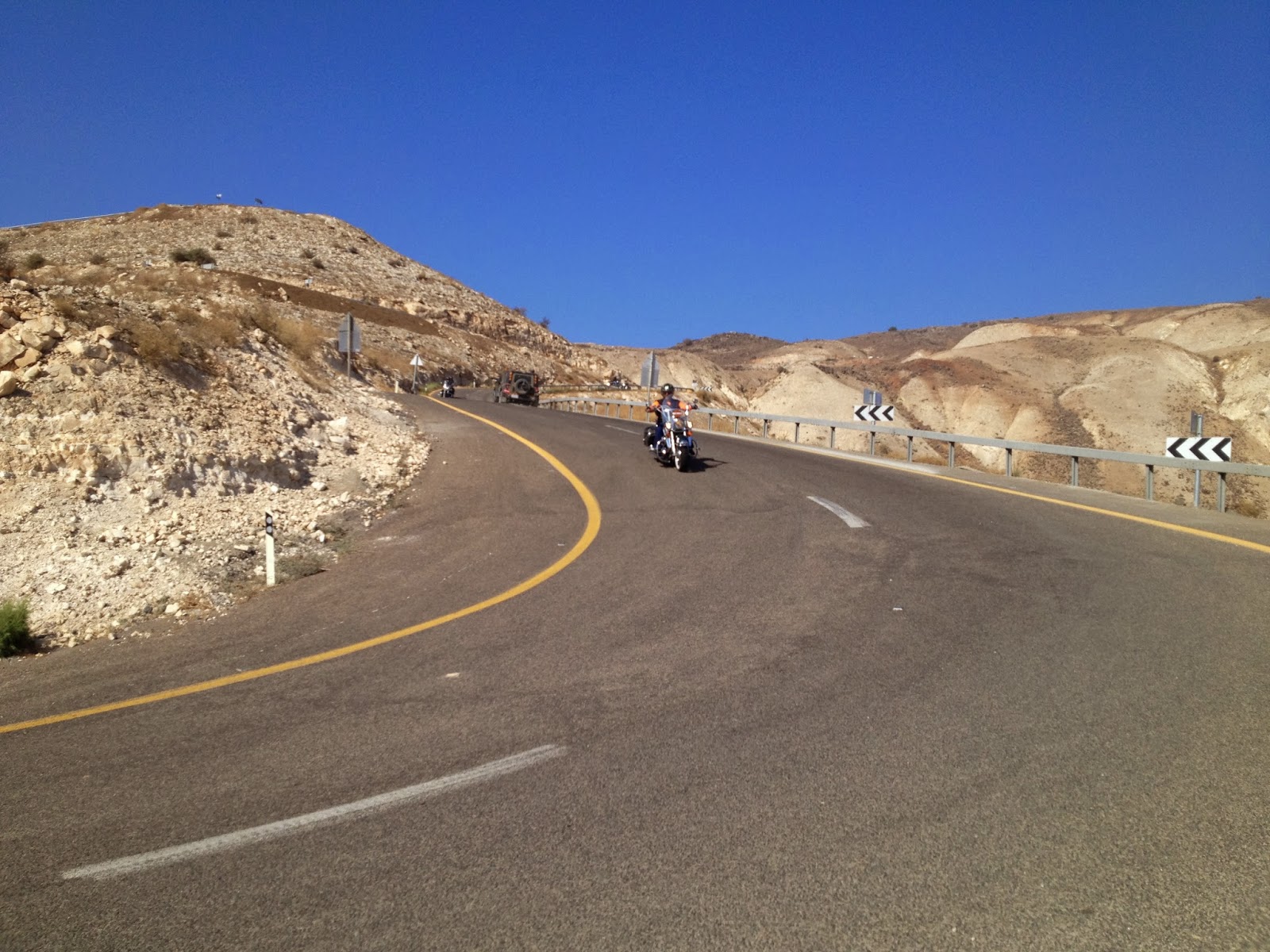 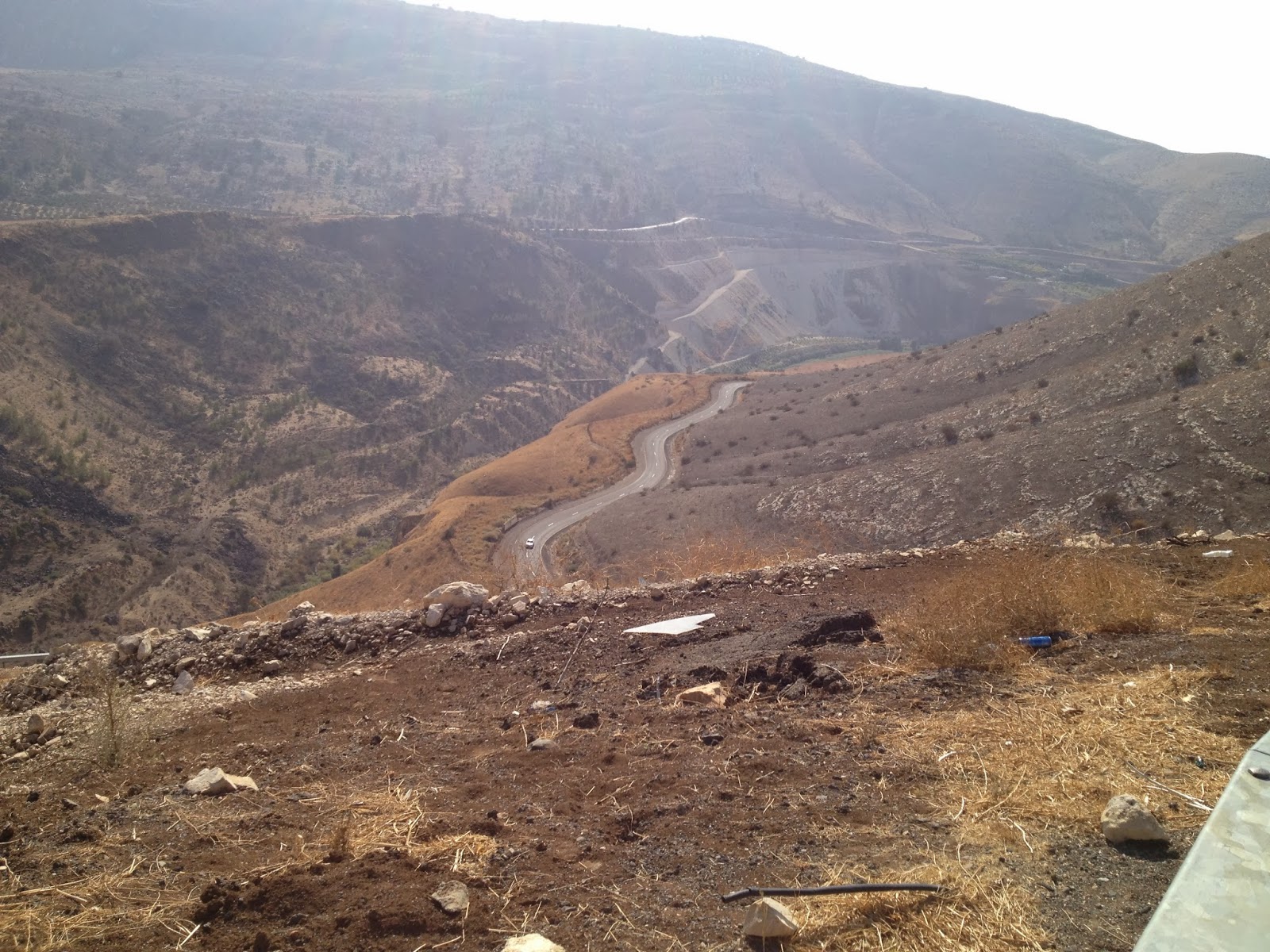 That is Jordan you are looking at. 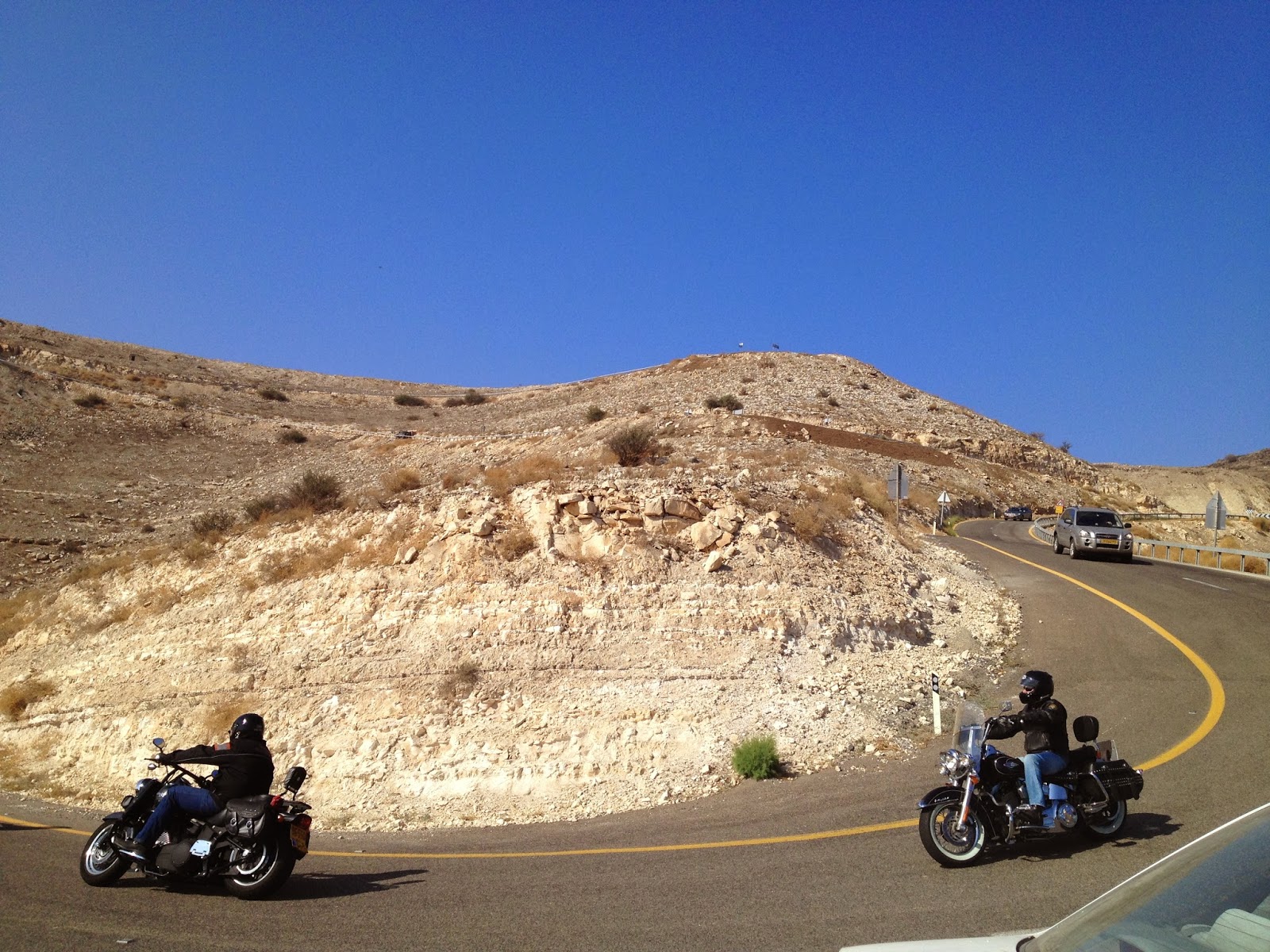 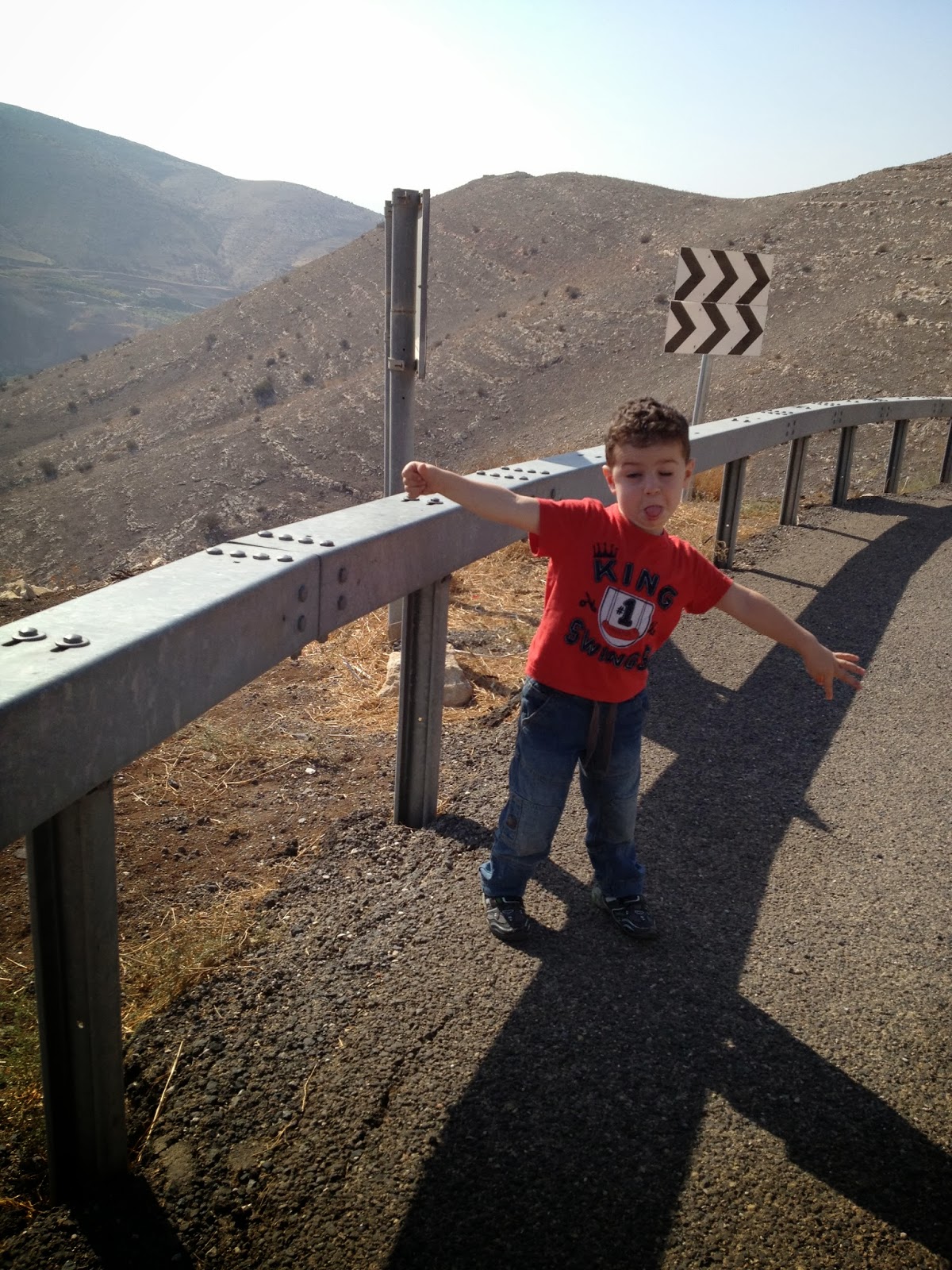 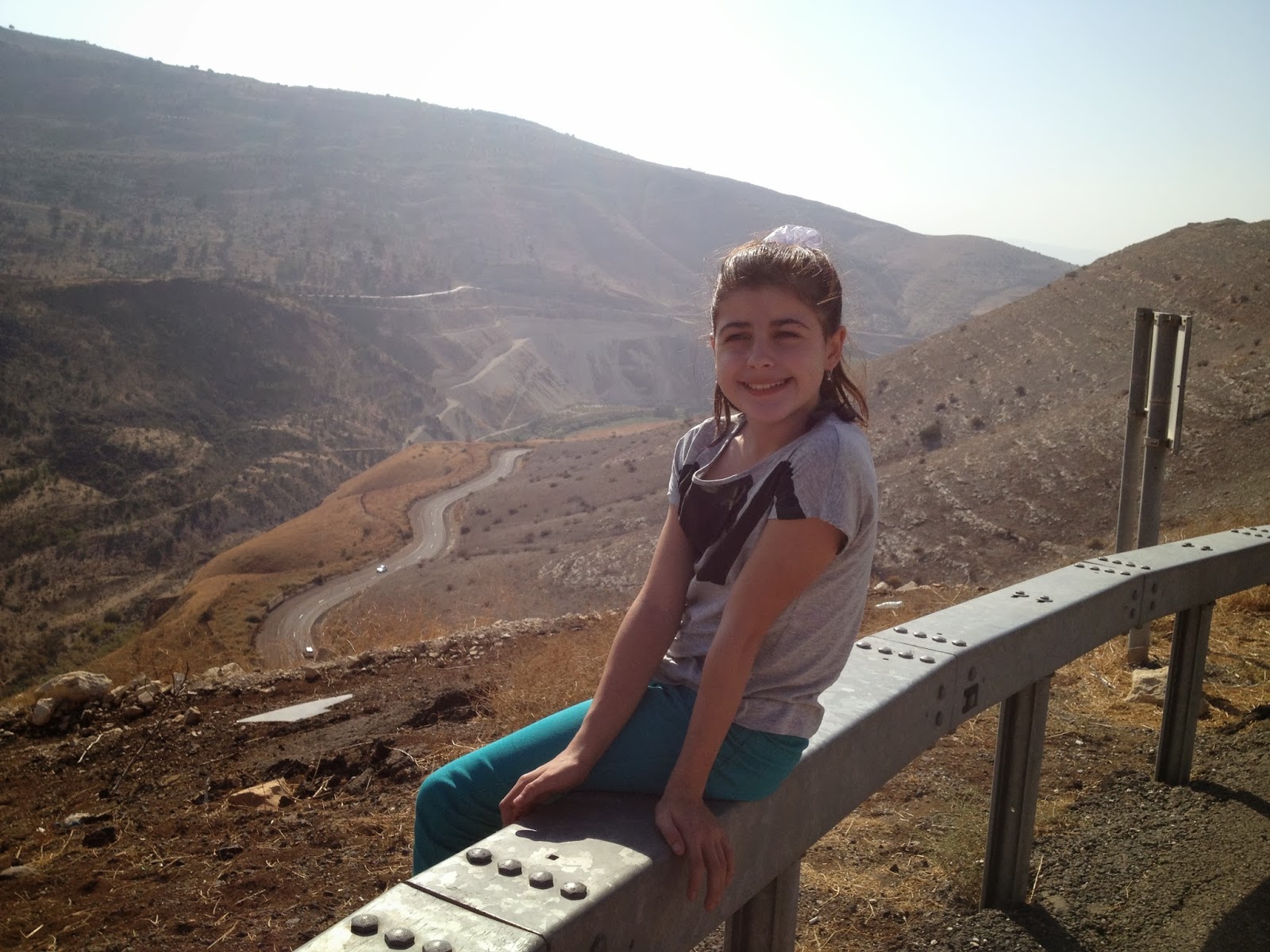 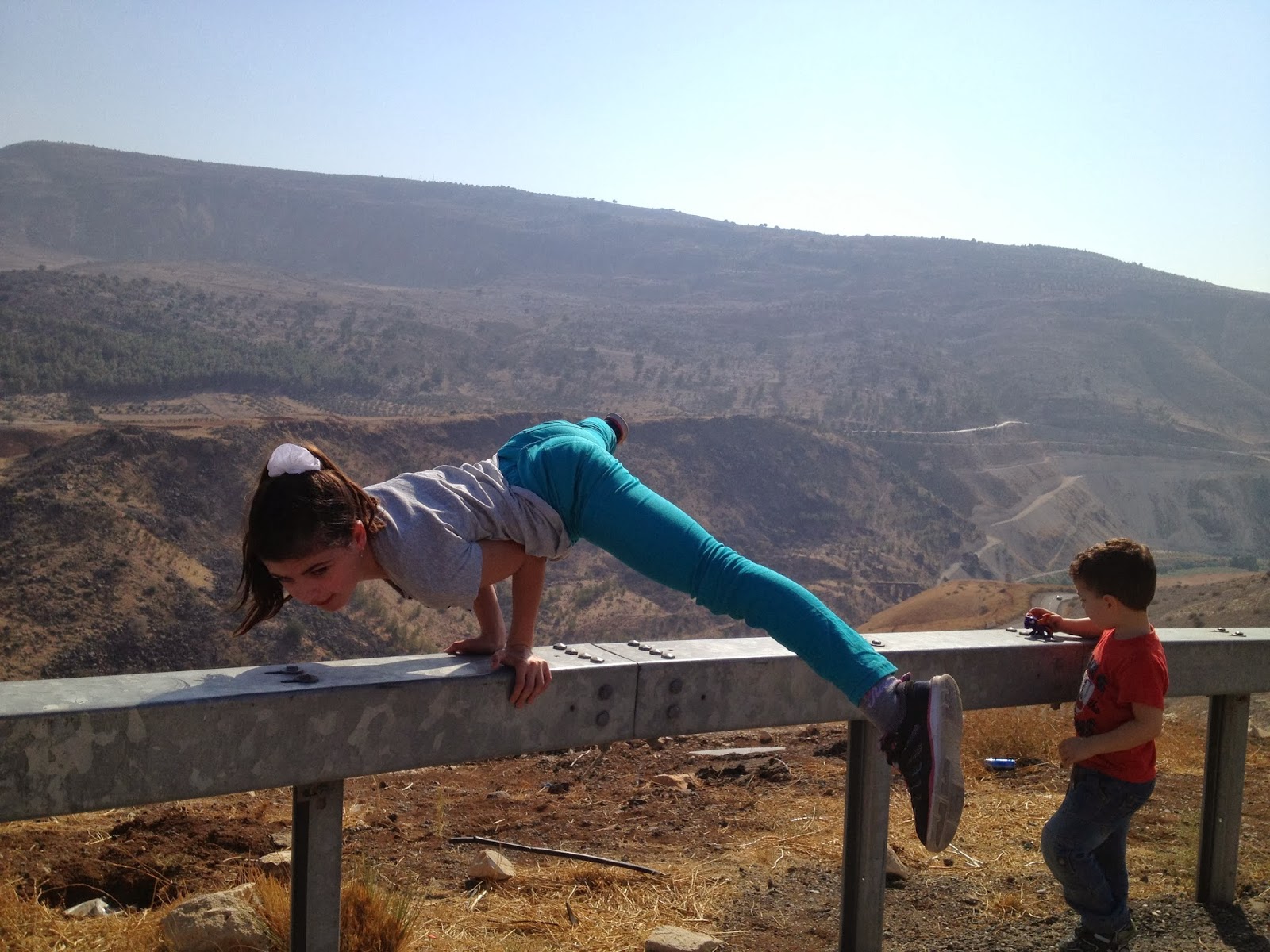 Lena couldn't pass up the opportunity to throw in a little gymnastics...
As we made it to the top of the mountain, we had a tail end view of Lake Galilee. 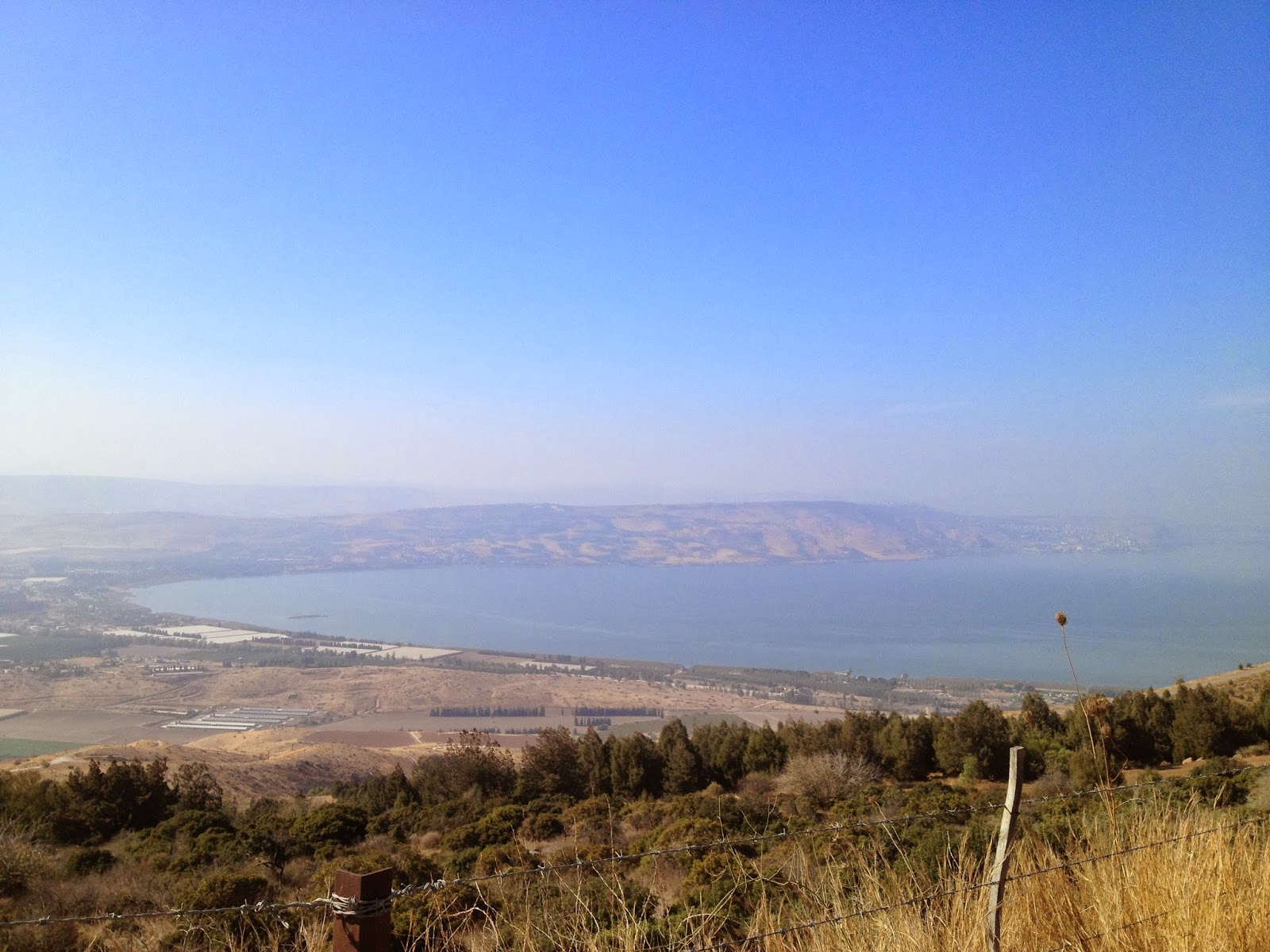 After dealing with the strange difference in temperature from the base of the mountain to the top (+10*!) We continued our drive to the El-Al river. Amazing views, great cactus and a long hike, that we didn't take. There is also a winery that requires reservations for tours. 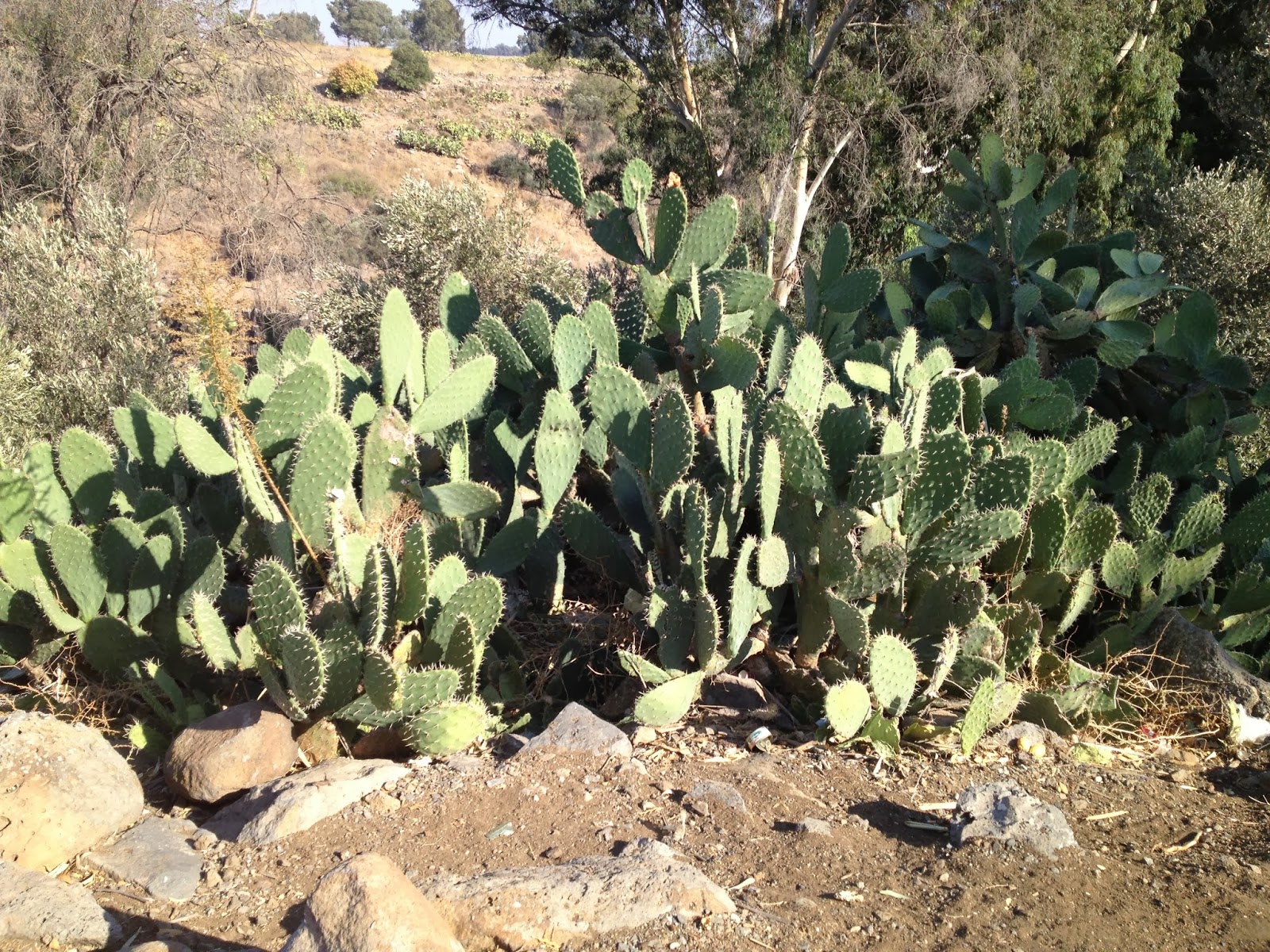 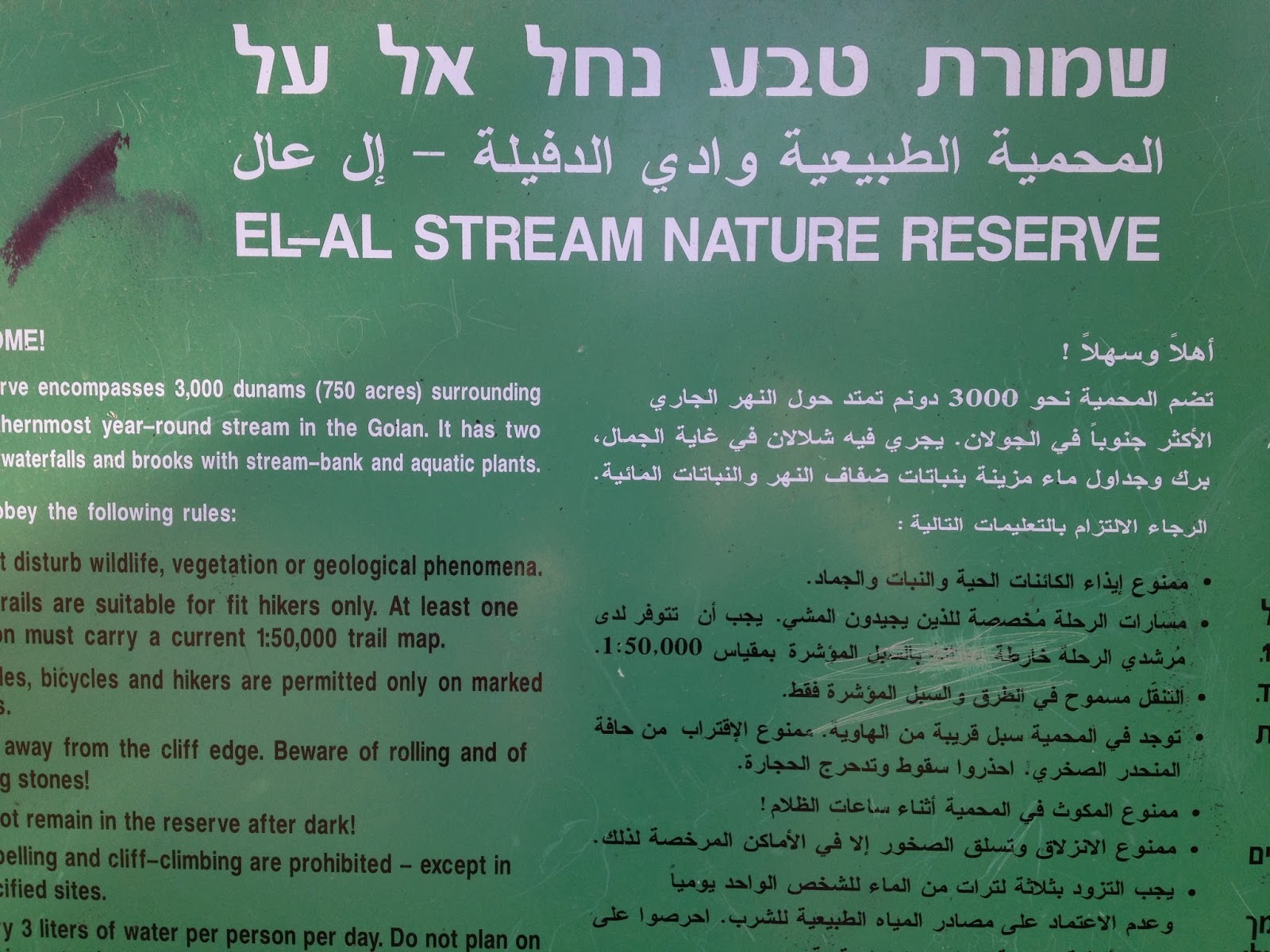 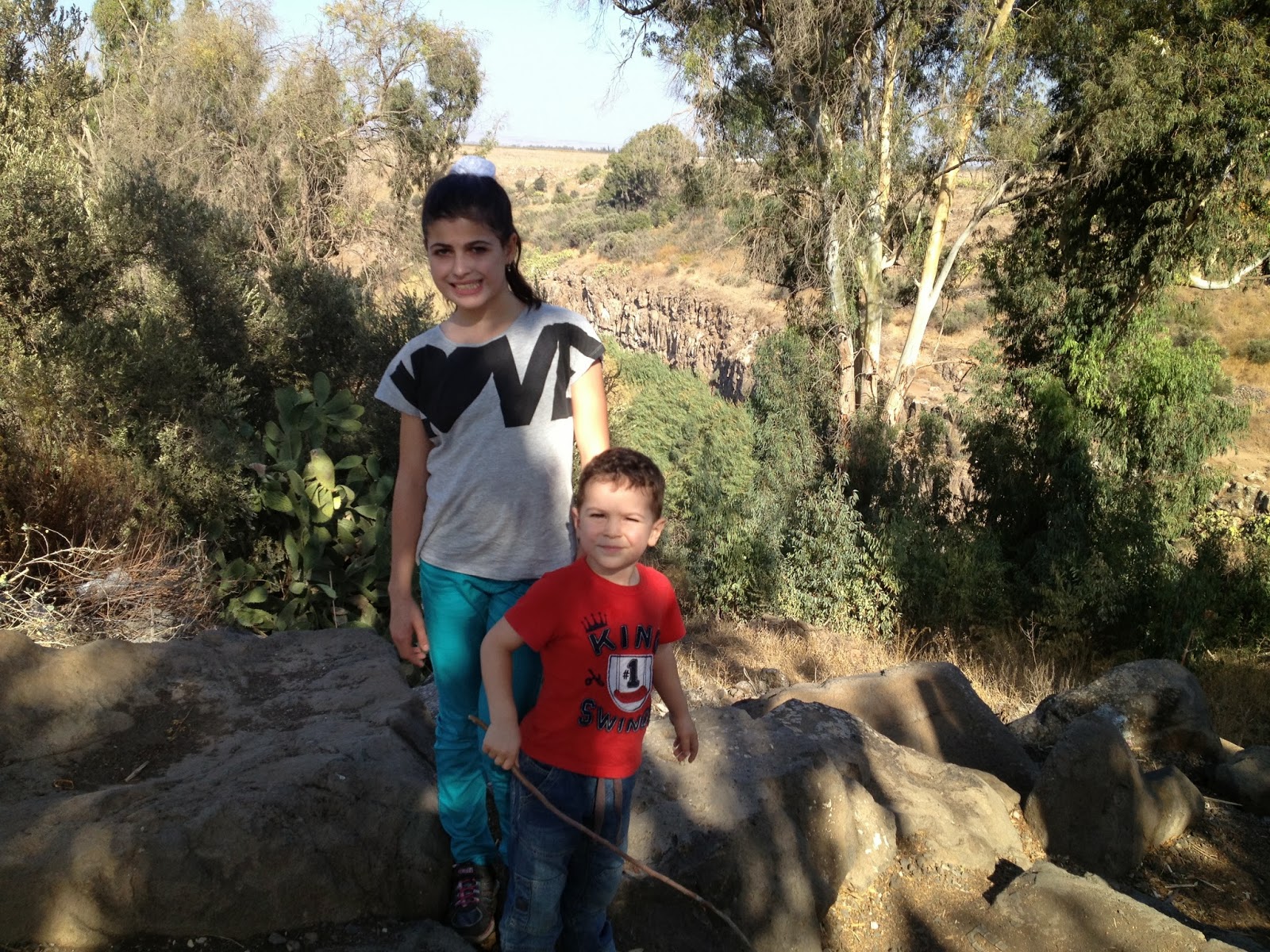 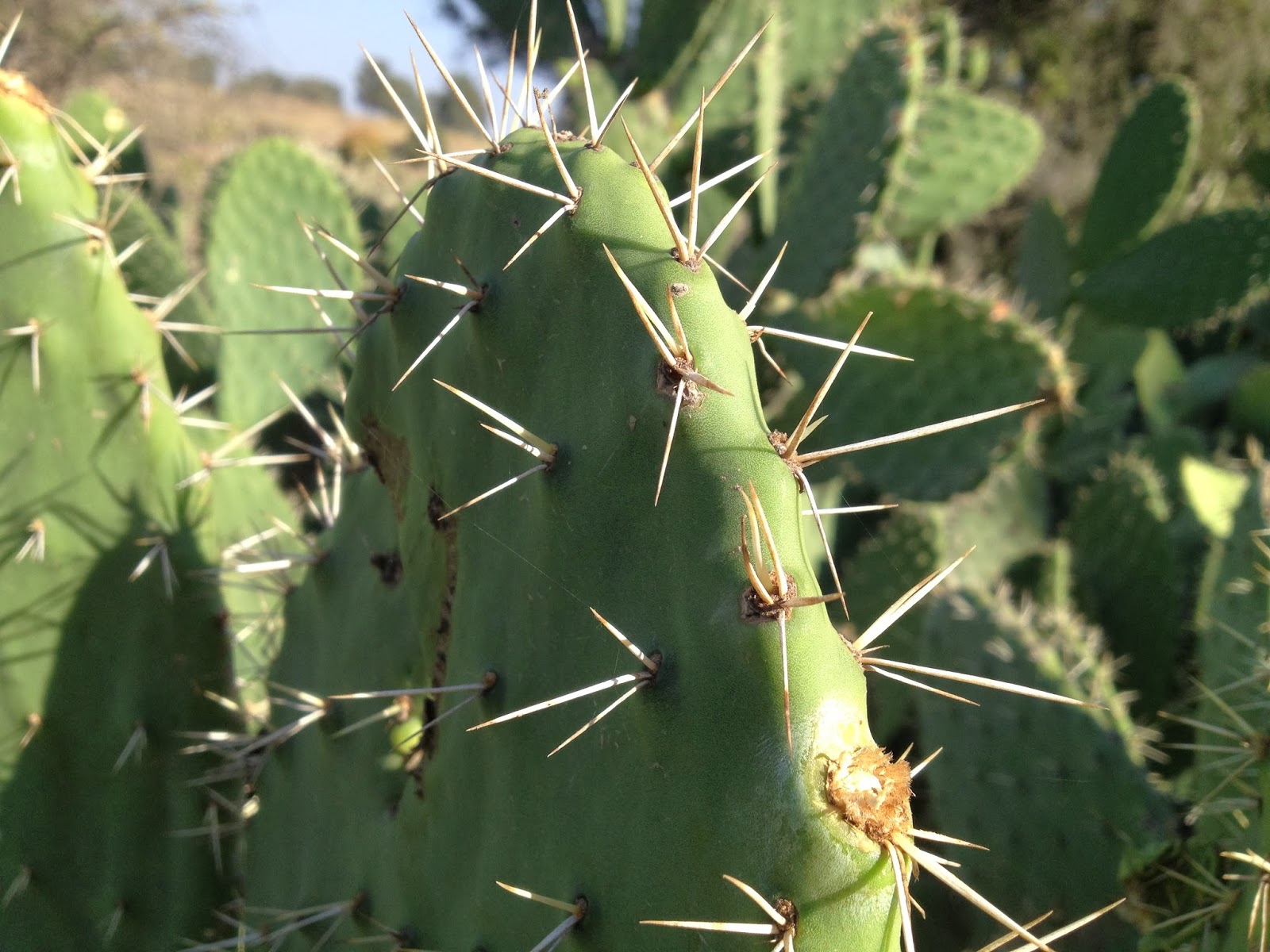 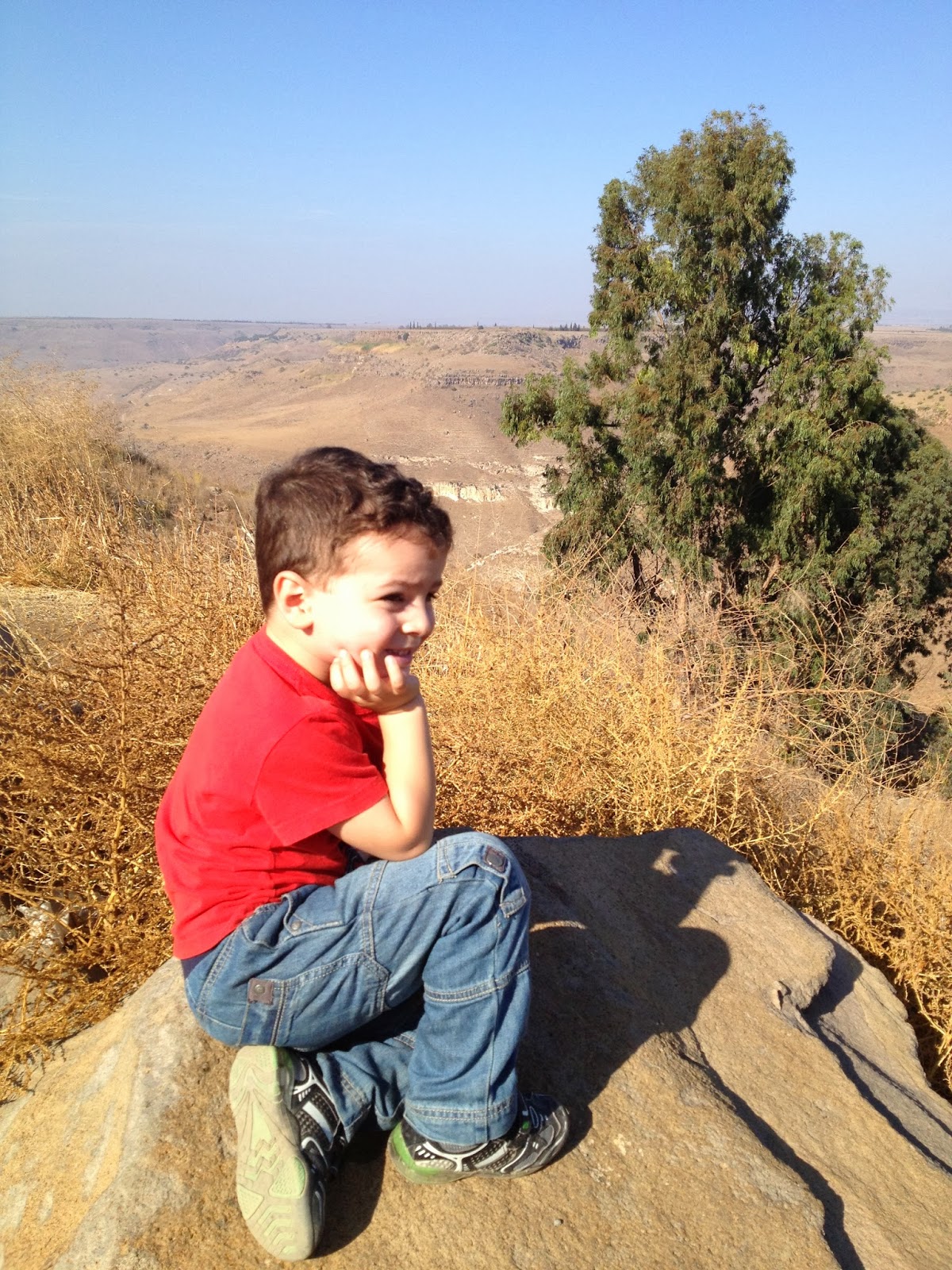 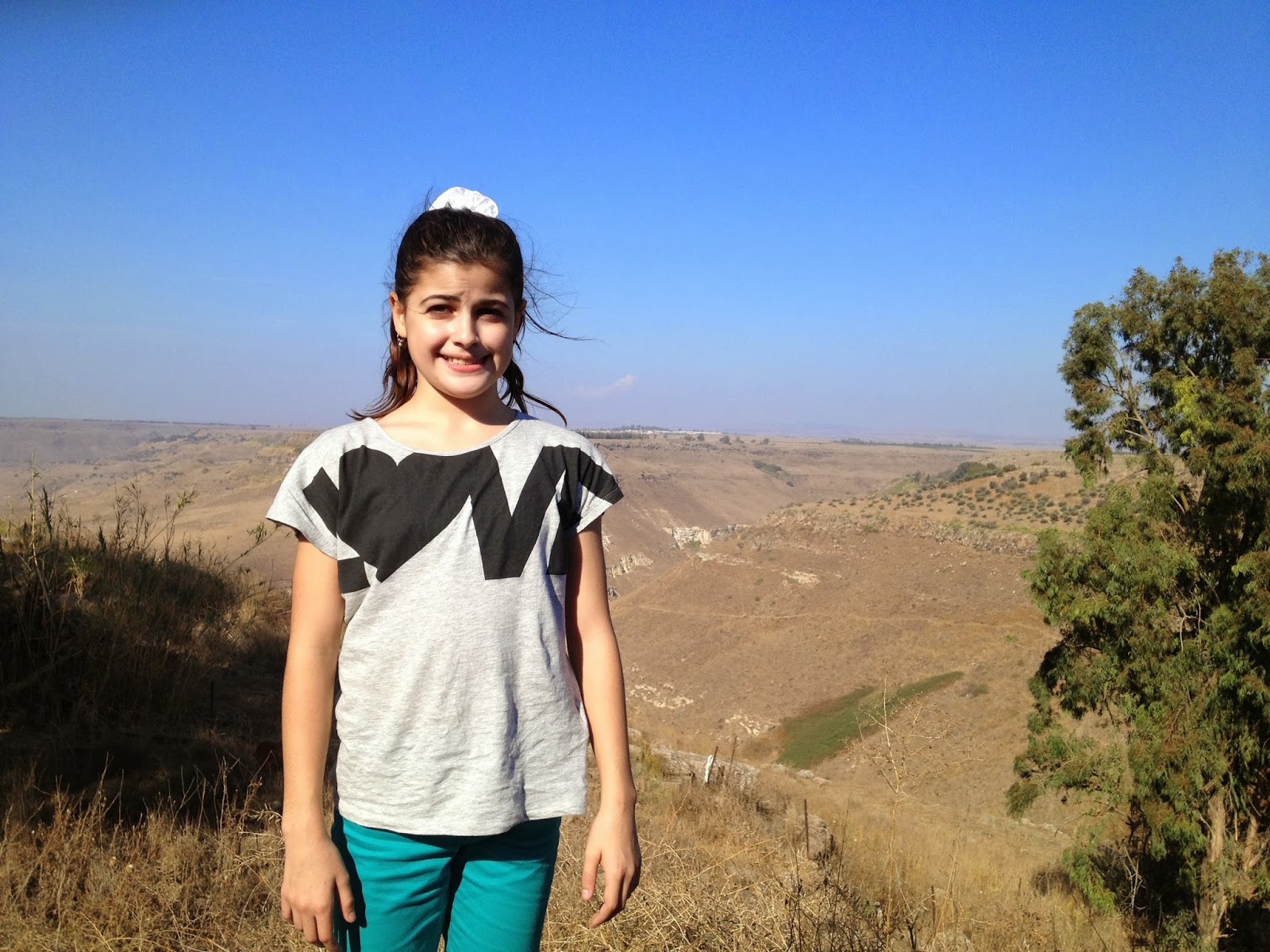 Lena has enough pictures by this time.
After this we continue to head due north. Directly into the Occupied area's that just a short time ago was Syria. It is significantly cooler in this area. The street took a sharp right turn and we were faced with this. A stark reminder of the devastating war that was fought in the area. Please note that this once was a Mosque. Mosques are not placed in the middle of no where. They are placed in the middle of a town so that all members can walk to it. There is no town left. We went up in the tower where the call to prayer is called. and had an anxiety attack on the roof. I wish I had the mind to take pictures from up there, but when you are pale and shaking and hyperventilating, it's a little hard to stop and take a picture. You can see where the bombs hit and destroyed it. 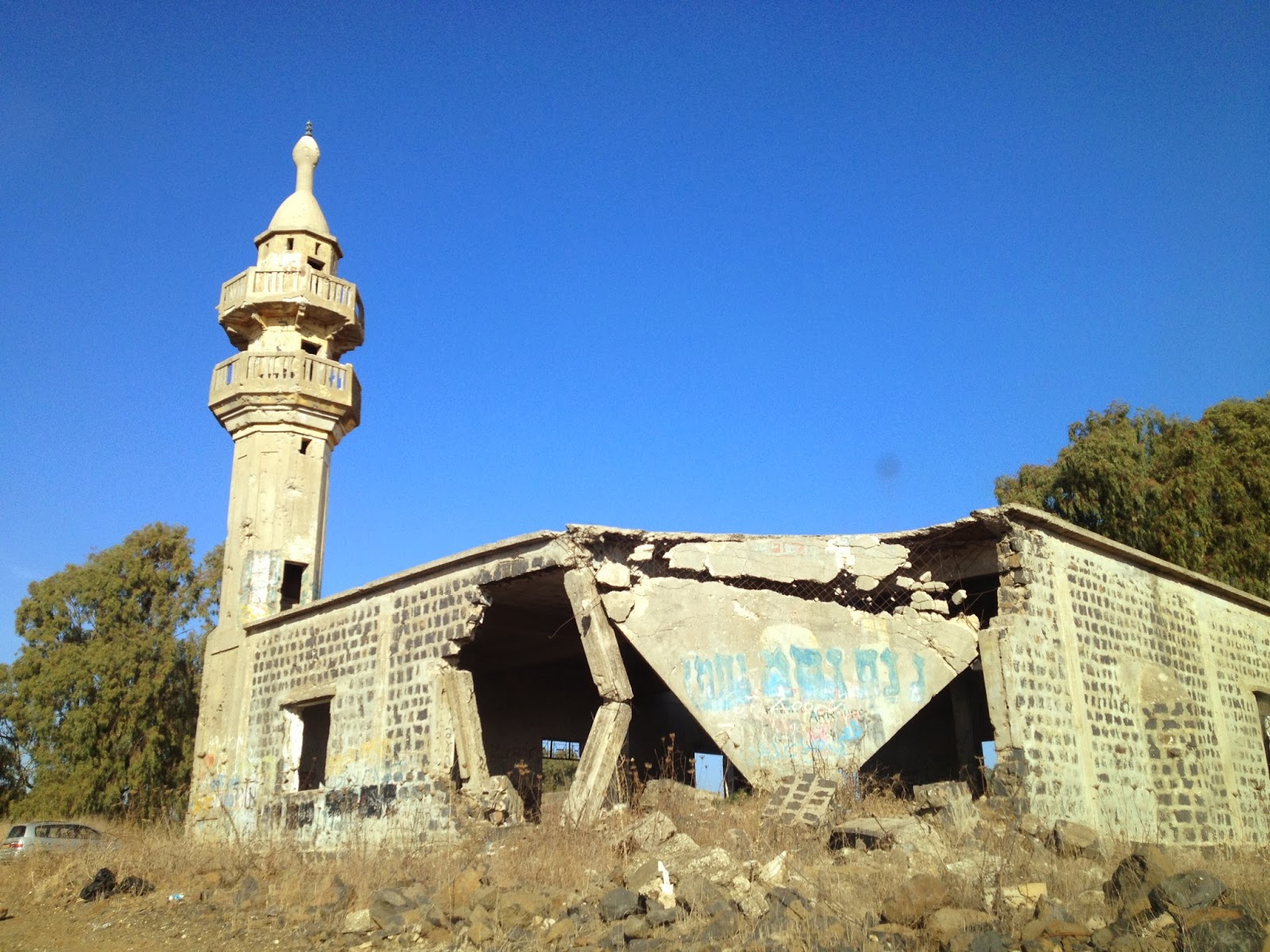 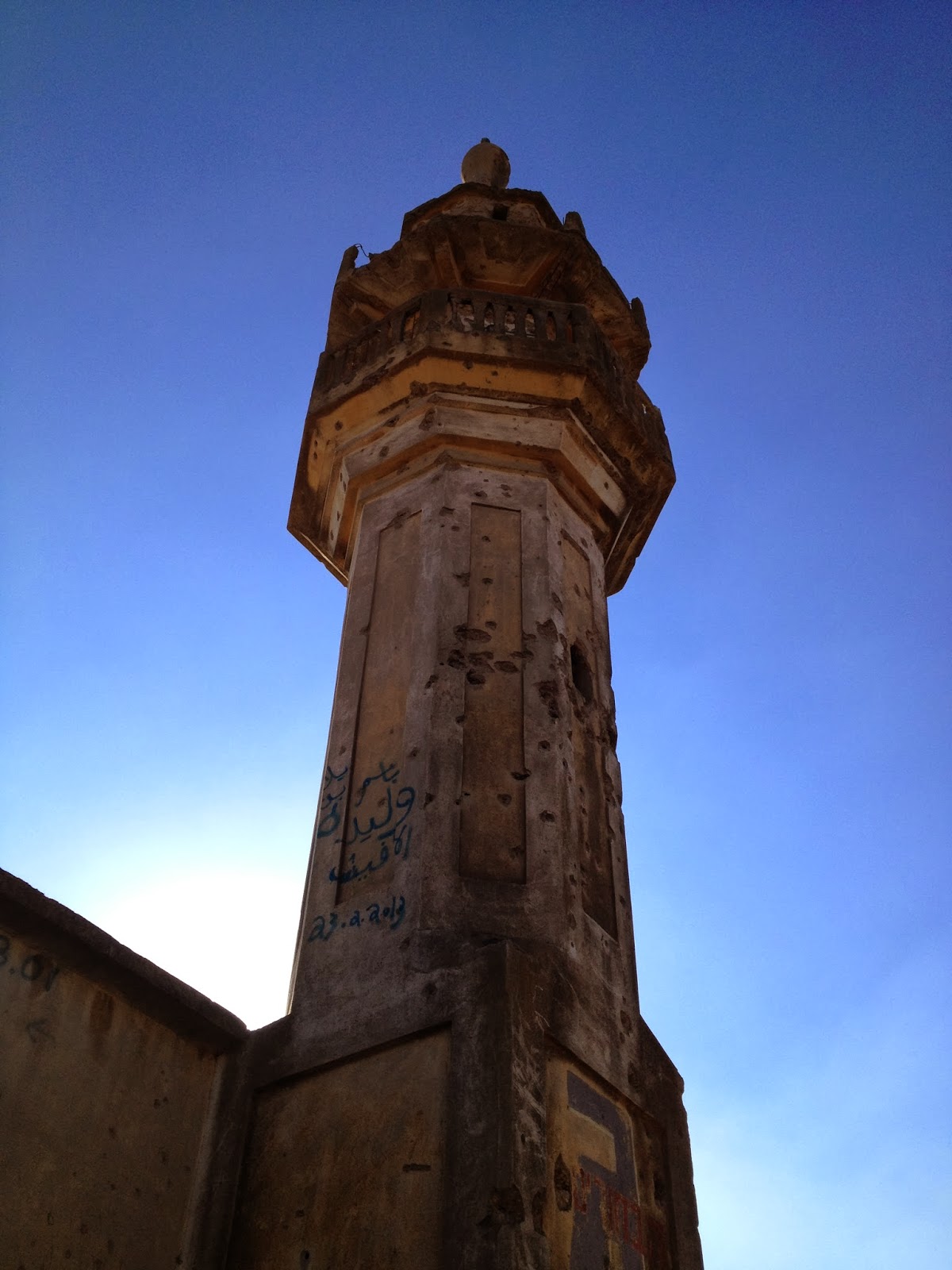 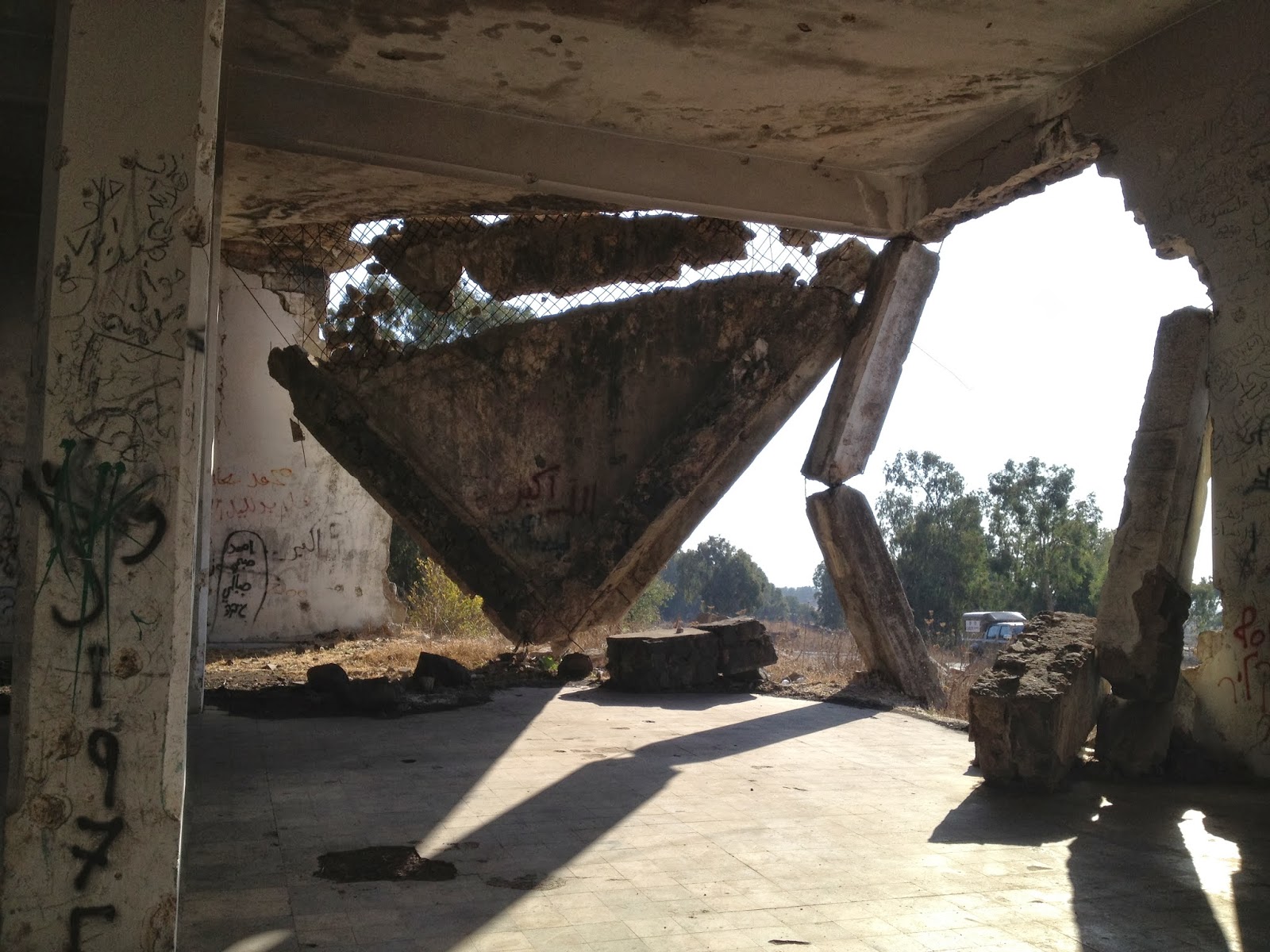 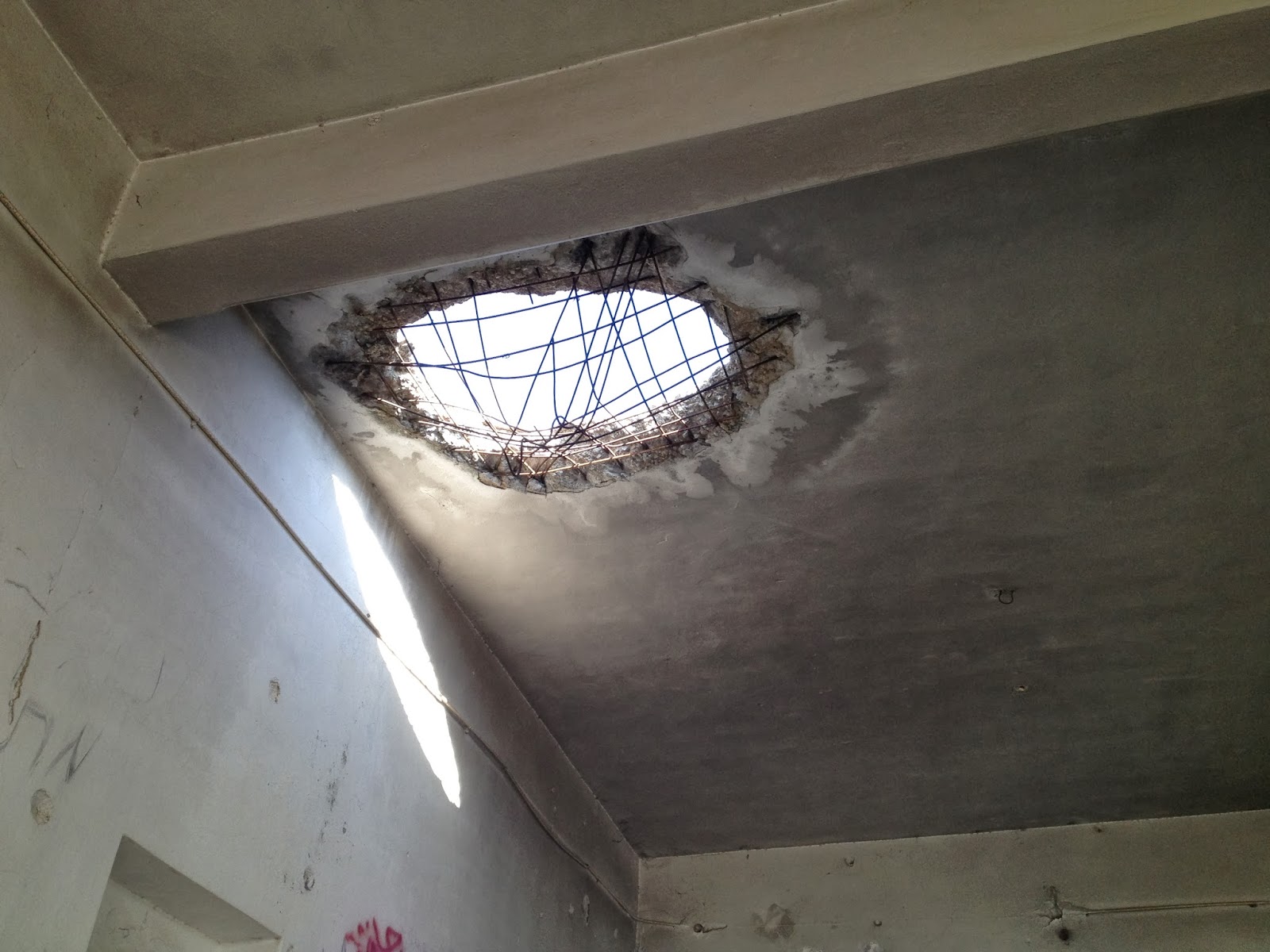 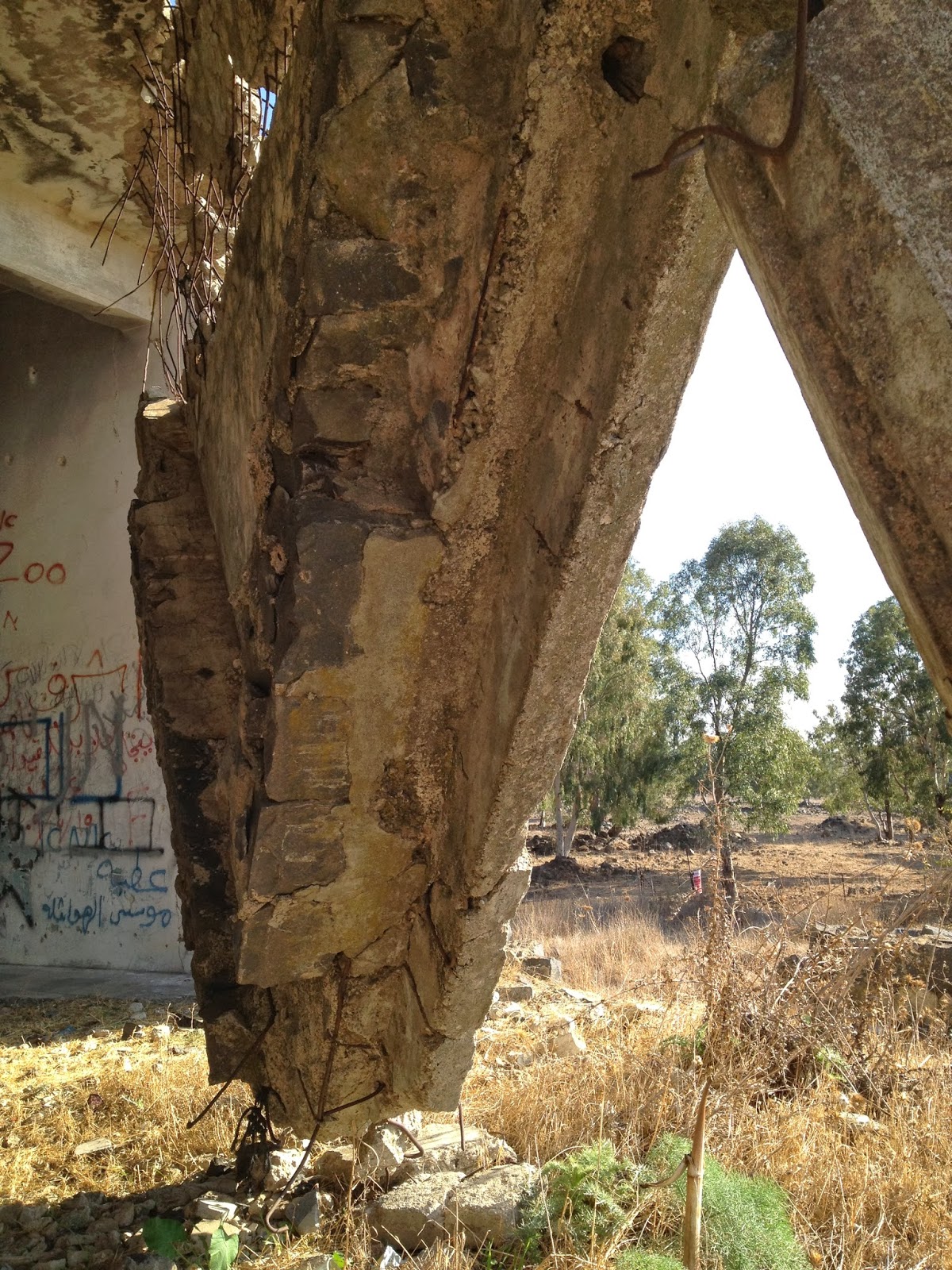 As we began to head west, we passed through area's that you could tell were once towns by the organized piles of rubble. We also passed signs that announced TANK CROSSING 100 METERS. Sure enough, there were some over turned tanks in the fields, old military jeeps that were dismantled. We then came upon a shepherd herding his sheep through a town.
We wove passed apple orchards, and stopped at beautiful rest stop and met a man from Syria selling Honey, Carob syrup and a mish mash of other items. He talked to us about how he can sometimes hear and feel the bombs when Israel and Syria exchange bombs. Very interesting man.We were also very close to a UN Station as we saw a few of their white SUV's with UN stamped in large letters and once, a man riding a horse. 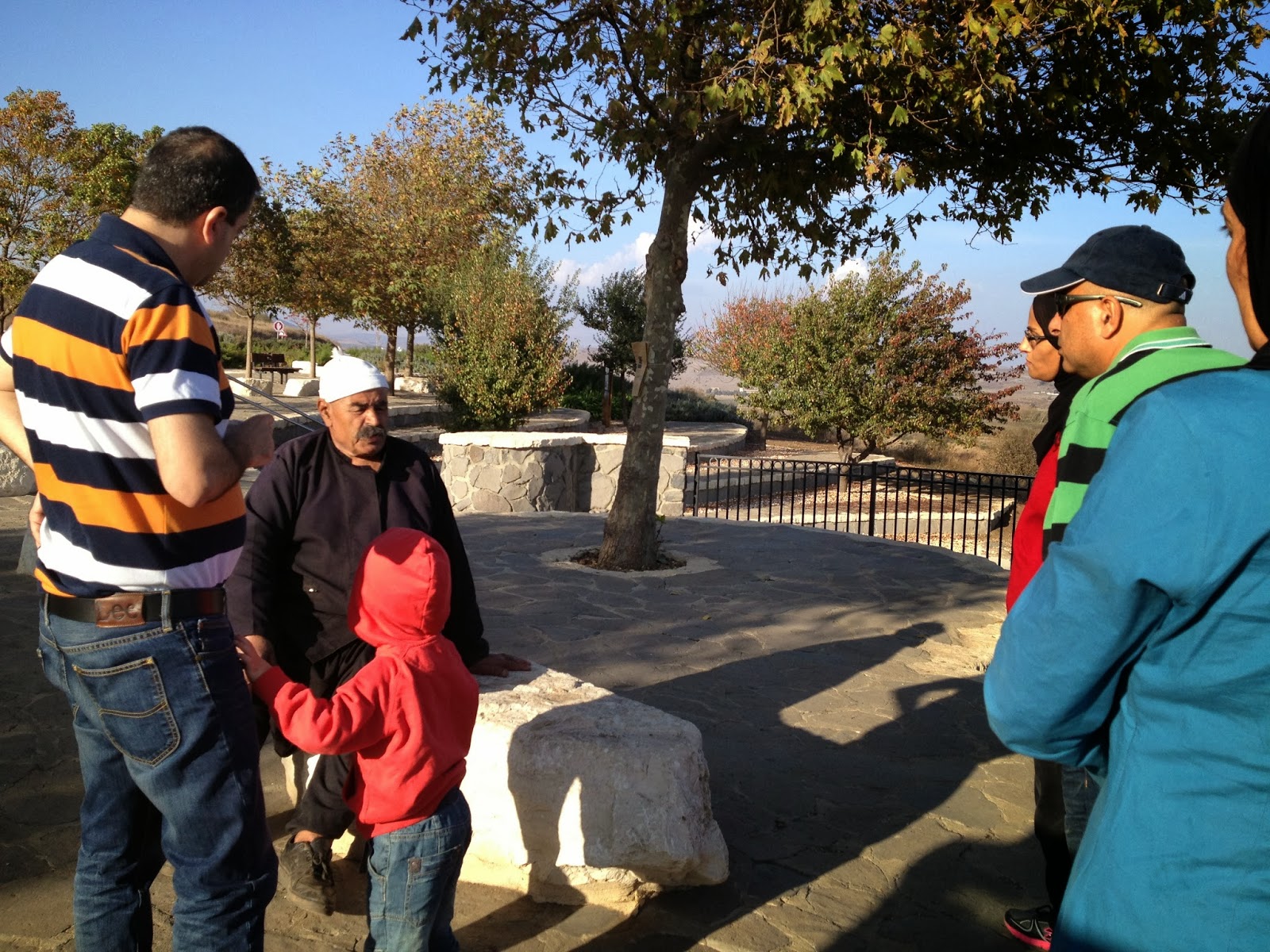 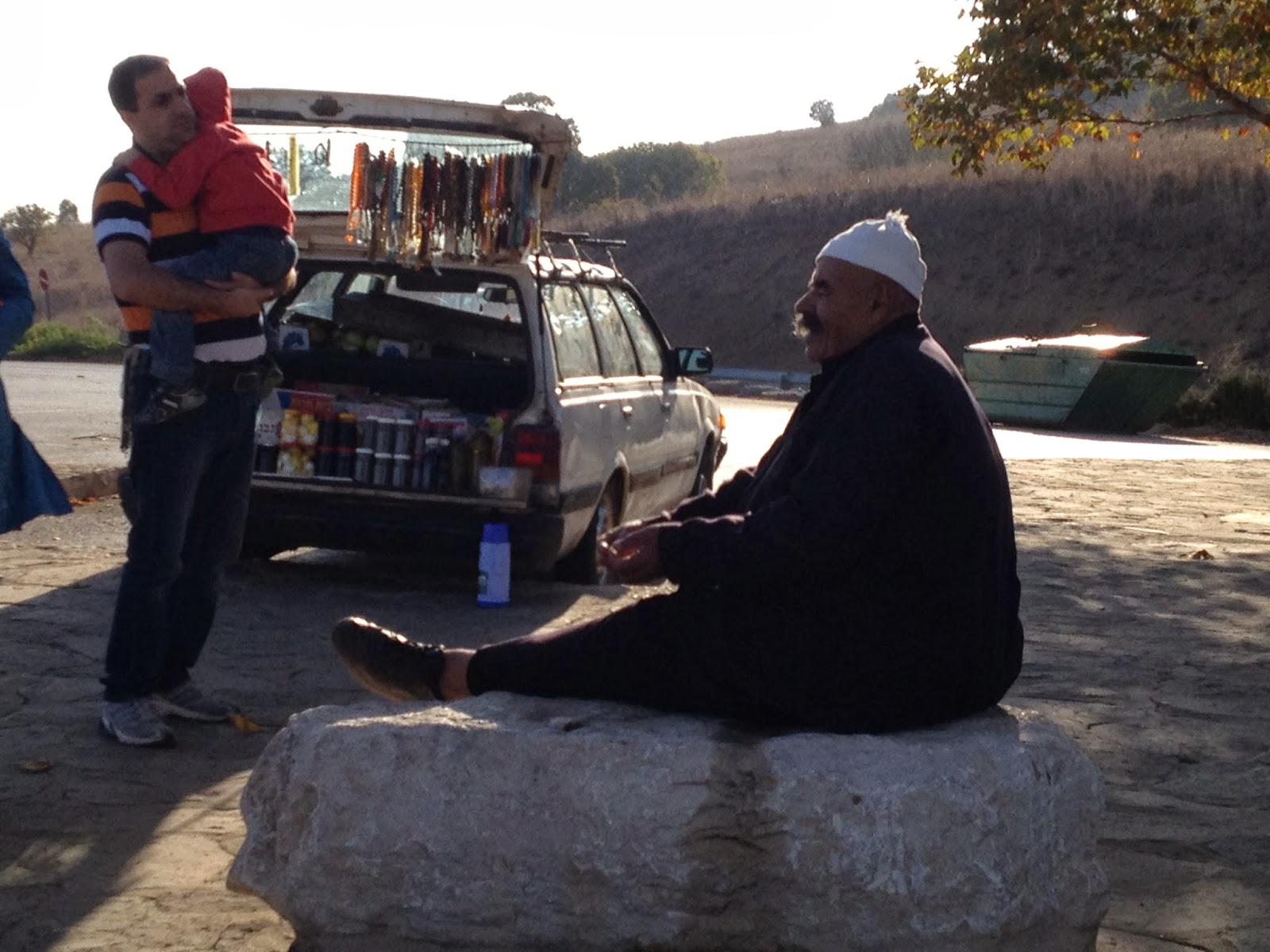 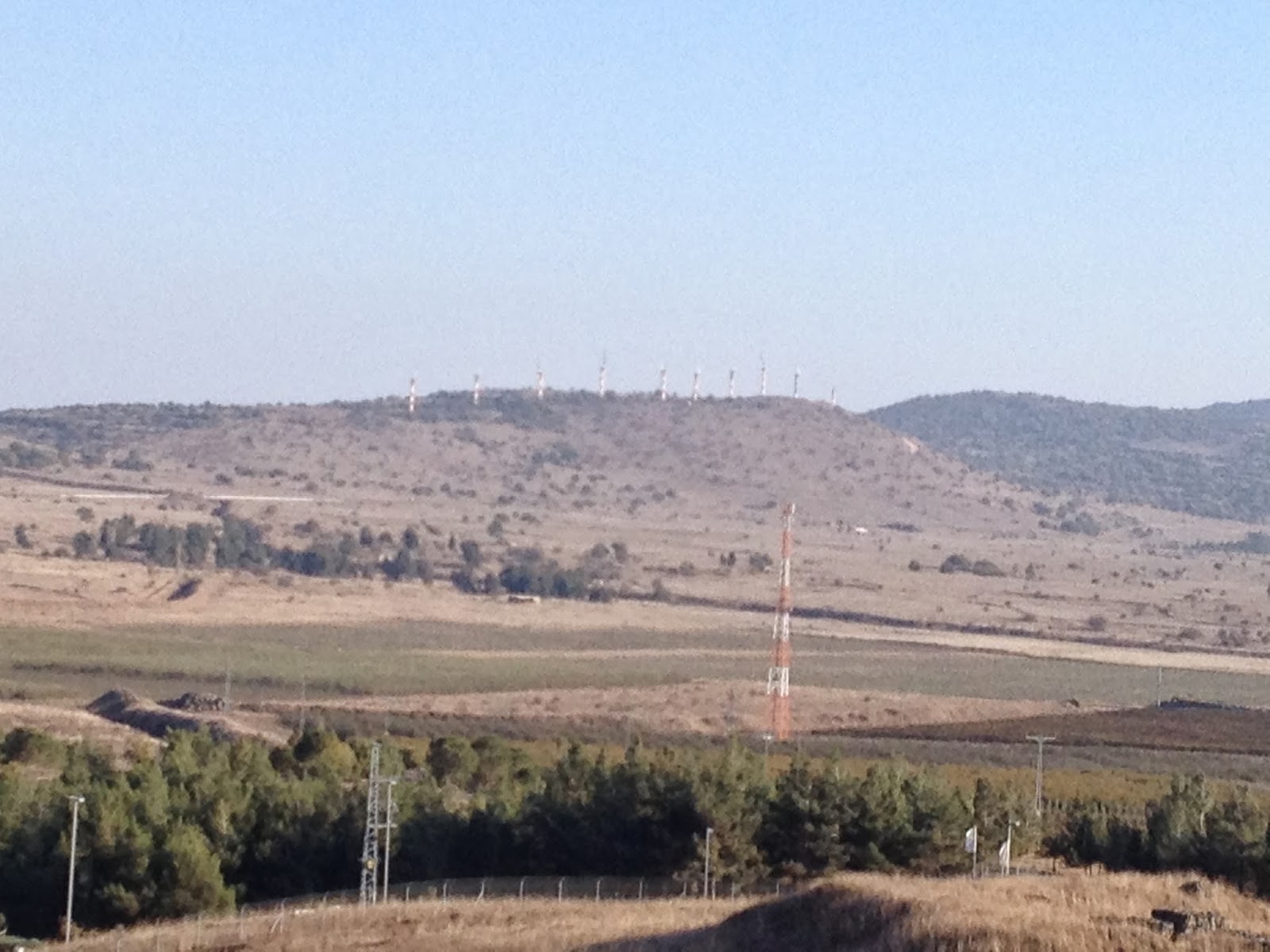 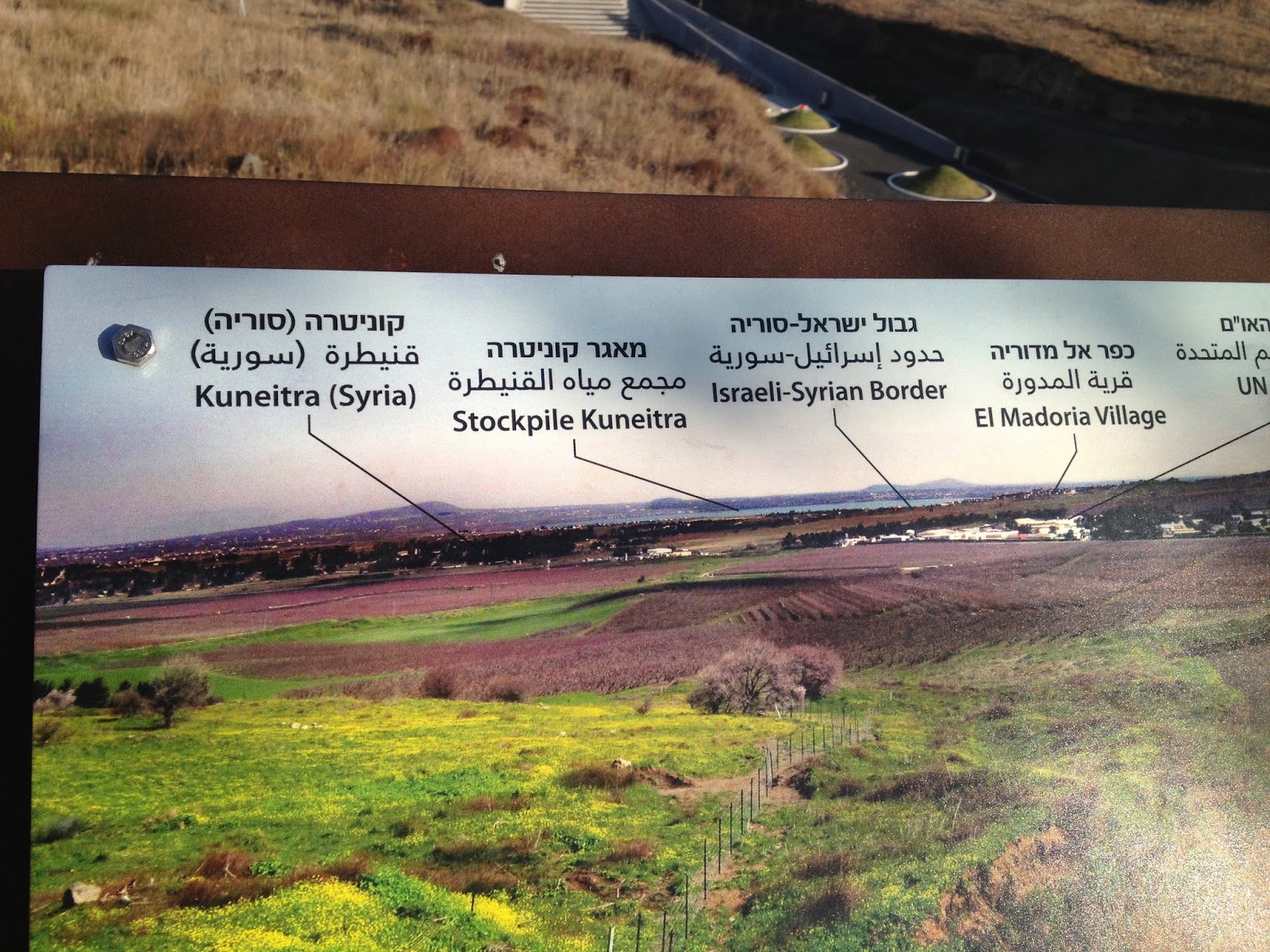 We ended up in a town called Mas'ada.
We stopped at a suk, an outdoor flea market and then went across the street to have some food. It was freezing there and they were all talking about making preparations for the coming snow. 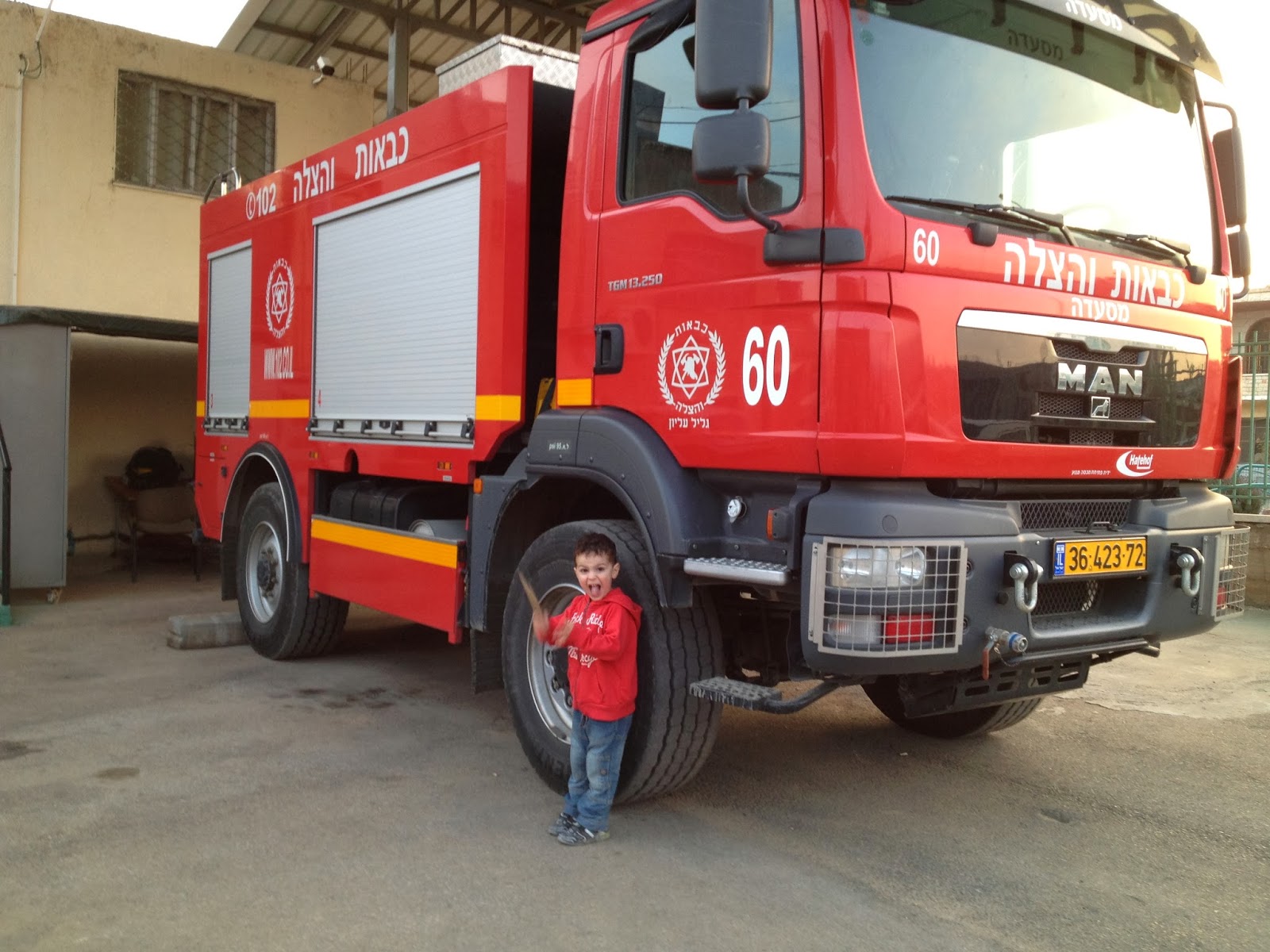 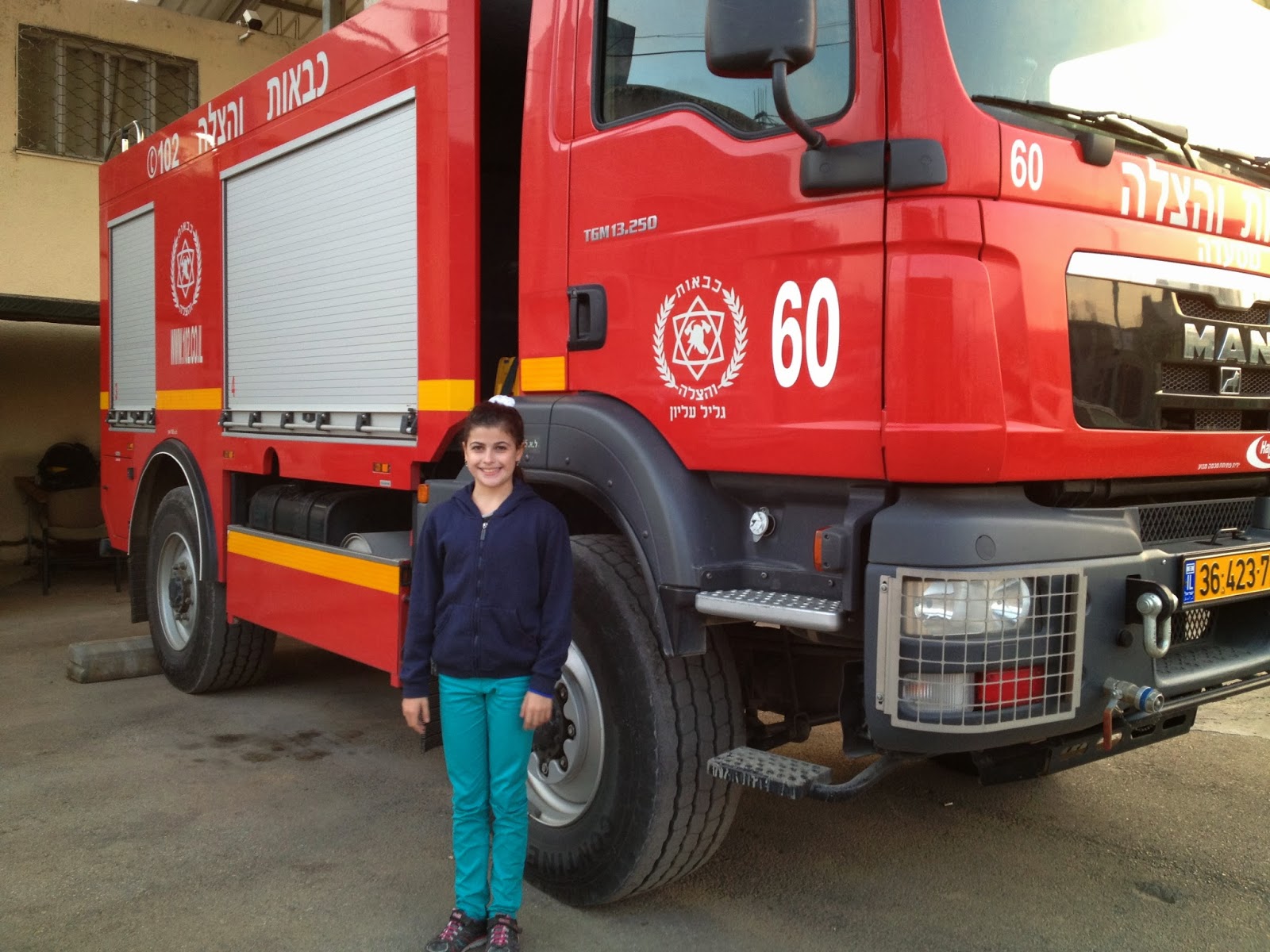 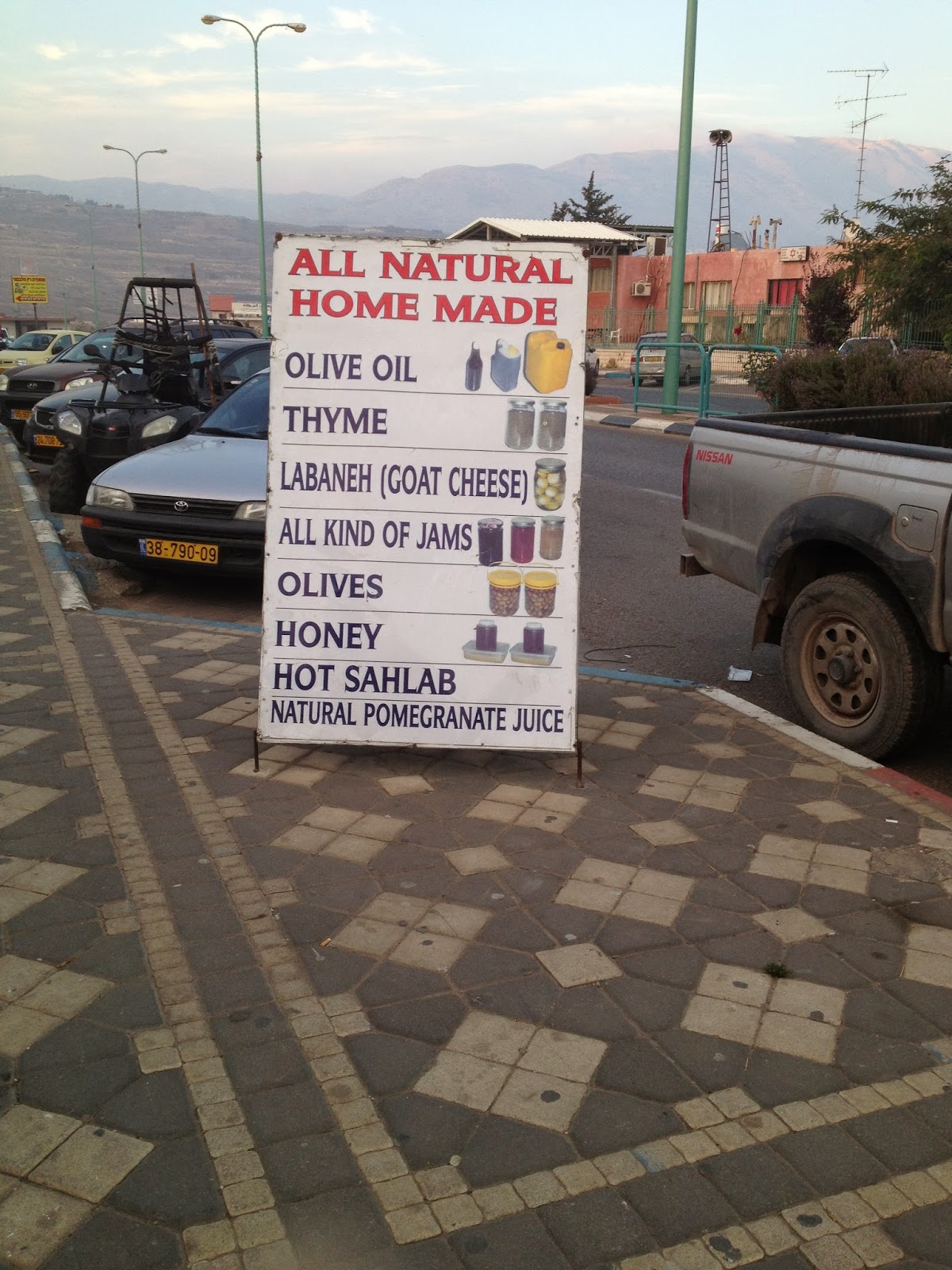 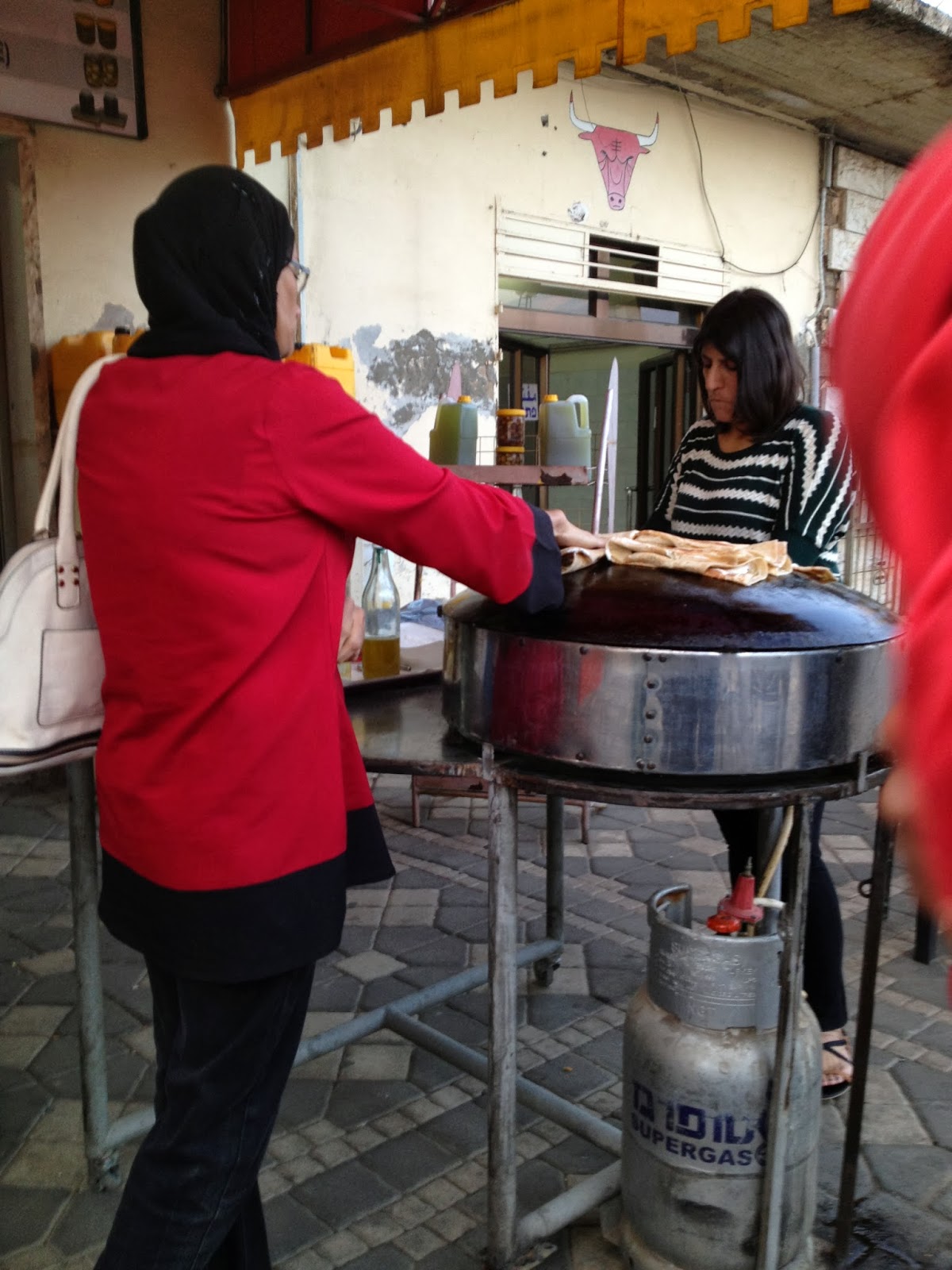 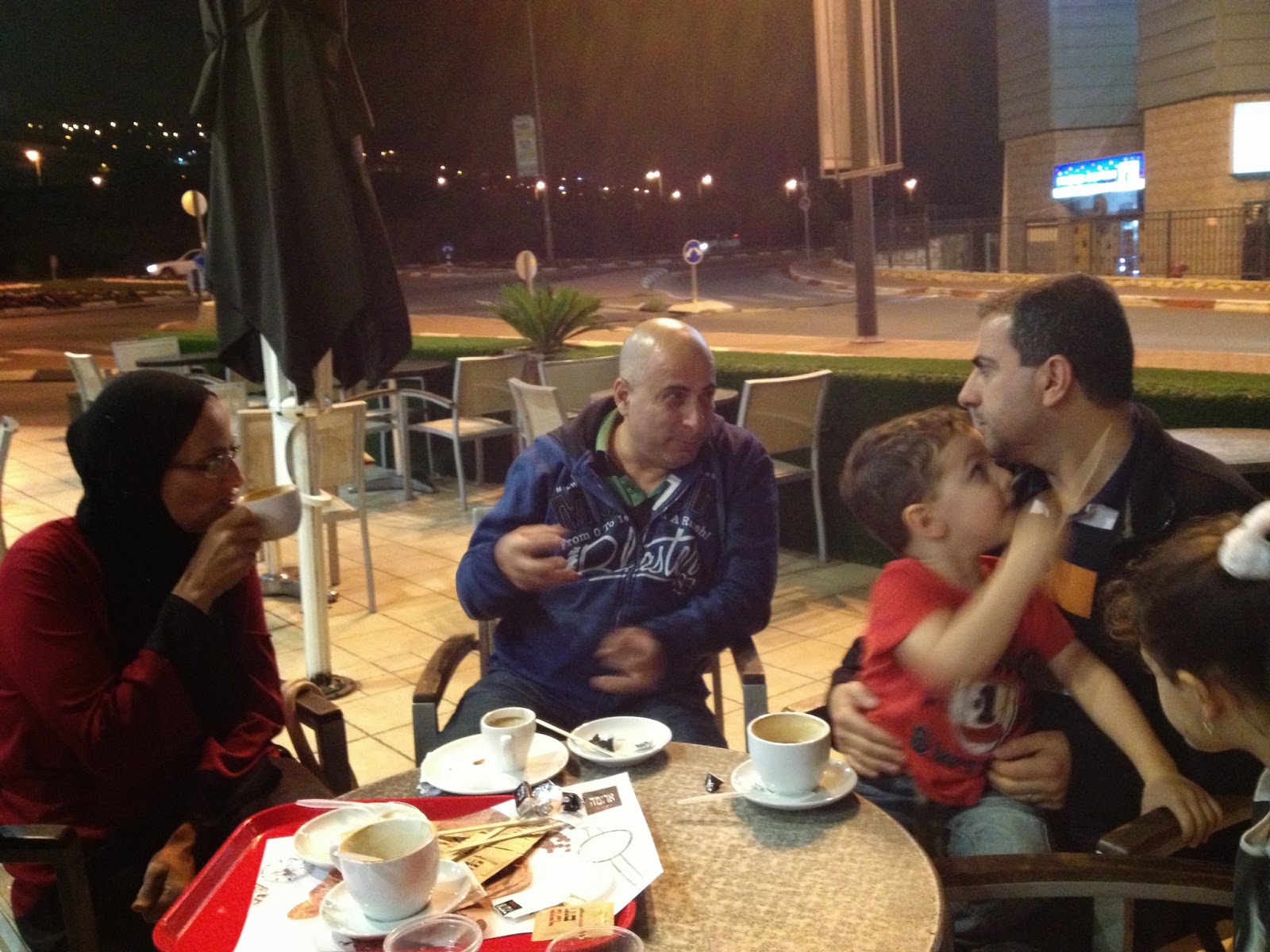 And last stop, a coffee break.