Everyone asks me, What is it like living in Israel?
This is a very difficult question to answer. Israel is a very complex place to live. There are so many ways I could answer this, and I am going to do my best to be honest and keep politics out of it. Which is hard, since Israel and politics go hand in hand.
I met a woman a few weeks ago that told me she has traveled the world, she was born in Cairo and while Egypt will always hold a special place in her heart, Israel (with a hand placed over her heart and a wistful look on her face), Israel is home.
For an American Christian, I do not feel at home here. I feel like a stranger. I feel like I am a grey in a world of colors.
Israel is very spiritually dry to me. Both Jews and Muslims have their rituals that they perform every day and every weekend. I hear the prayer call 5 times a day from 5 different mosques in the area. I have seen orthodox Jews bobbing on the side of the road praying as the sunset. Listened to the hours long lectures about Islam being blasted from the loudspeakers in town on Friday afternoons. The Jewish men in their kippa's coming back from their local Beit Knesset in the evening. To me, those are just that. Rituals. I do not feel their spirituality. I am not moved physically by their worship. I have never felt farther from God than in the home of His people.
I have yet to encounter one Christian that I can have fellowship with.
Growing up and being married in America to an Israeli Arab is a completely different world than being an American Christian married to an Israeli Arab in Israel.
In town (an Arab town) I am constantly stared at. I am a great oddity to people. I do not dress like someone from here. I do not look like someone from here. I do not speak like someone from here. At times I am too loud in my laughter, I am too free with my touch. I don't like coffee or tea really (Mint or Yansoon only)! I have a set number of stores that now know me and that I am comfortable going into. When I venture outside of those, I have to deal with a constant barrage of questions and unrelenting stares. First, I am spoken to in Hebrew, even if I greet them in Arabic. When I say that I only speak English or Arabic, they look at me like I suddenly grew a second head. Then the questions begin. Where are you from? Why are you here? Who is your Husband? Where is better? America or Israel? I always say Canada as it was my favorite for the 4 years we lived there, and that confuses them. =) Do you teach English? Why don't you open a salon, a day care, teach at the school? And my favorite. You were living in America and your husband brought you here? Is he crazy?
In Jewish towns, I don't stand out as much. Except when I try to get service and the woman helping is just a little too nosy (or Israeli) for  my taste. When I say I don't speak Hebrew, they ask me their own set of questions. Where are you from? Nevada. (you can see them trying to figure out how big of a Jewish population there is in Nevada) How long have you been here? Sometimes I lie and say just a few months. Other times I tell the truth and say a year and a half, but then I get the lecture. AND YOU DON'T speak Hebrew yet!!! (No, do you speak Arabic?) Mazal Tov on your Aliyah!!! I just smile and say thanks.
When I am out I try to keep as low of a profile as possible. I don't like having to answer so many questions. I just want to buy my things and leave.
Then, comes a whole other set. The mom's. Ugh. I am extremely introverted and socialization can be painful for me. I have completely giving up on Arab women, I just can't compete with their life long friendships that they have formed after generations of living in cramped villages. It has taken over a year for me to broach any kind of friendship at my daughters gymnastics. I decided from the get go to be honest when asked one of the million questions listed above. No, I don't speak Hebrew, and I really should learn someday. My husband is Arab, I do speak some Arabic. We live in Zemer, it's just north of Bahan.. South of Magal... Lena speaks Arabic, but she is slowly learning Hebrew. But like most sport teams, there are the cliques. Most of the mom's I meet don't seem to care about my background. And for that I am really grateful.When I go to parks in the area, I once again try to keep a low profile as to not bring attention to myself. I just want to be free of the labels. I just want to meet someone who doesn't ask me about my background and just wants the kids to play together.
Some days I come home mentally and physically exhausted from all this.
Now. On the positive side. The weather is amazing. The scenery is beautiful. Amazing places to visit. People are very friendly. We have an amazing house with a great view. And it's great that my kids are learning new languages, getting to know my husbands family and culture.

The cons.
Arab area's are FILTHY. Everyone burns their garbage that doesn't get picked up. They litter. Everywhere. Building supplies are just dumped in the closest empty lot. Leaving it for everyone to see. Everyone smokes. You can not go into a store in an Arab area and not find someone smoking. People can not drive worth Sh!t for the most part. The constant police intimidation sucks. How many police check points are really needed? The military training points on the street corners, with soldiers carrying their suitcases and riffles.Unless you live down by Gaza (which is about a 2 hour drive) you don't feel any tension, other than training days for the air force. Sonic booms kill me. One evening we sat outside and counted 18 jets fly over in a 30 minute period. That happens about once a month. Just like if you lived in California near Travis Air Force Base.
All houses have bomb rooms by law. We do not own a gas mask. Arab towns are not targets from neighboring Arab countries.
Everyone is friendly with everyone else, but there is a major separation. You have Jewish towns and Arab Villages. They rarely co-habitate except in larger cities like Tel Aviv, Netanya, Haifa...But you will still have your neighborhoods.

Five things kill me.
First is when I see 4, 5, 6, 7, 8 year old's from the West Bank on the street corners begging for money. Once I gave a boy of about 8 all the change in my wallet. He ran to a group of other kids only to be yelled at that he didn't get more from me. He returned asking for more, which I didn't have. He went to the next car, got more change. He and his friends then ran down the road to a felafal kiosk and came running back with food and proceeded to eat it on the street corner. Some days kids as young as 4 and 5 are standing there. You can tell they are worn out from asking the same questions over and over. No hope in their eyes. When it's Zataar season, they are selling bunches of fresh Zataar (Thyme) for 5 shekels. Or key chains. Sometimes there are moms standing holding babies. In town there are heavily veiled women who have apparently been "bused in" from the West Bank by organizers who take a percentage of the money. They often hold papers showing a surgery they or a loved one had, or debt papers, sometimes a child with a handicap. They can be quite bold and will often knock loudly on your window, or stand so far into the street that you have to hope you don't side swipe them as you pass. But it's the kids that are out there with out an adult that pull at my heart strings.

Second is the Wall. 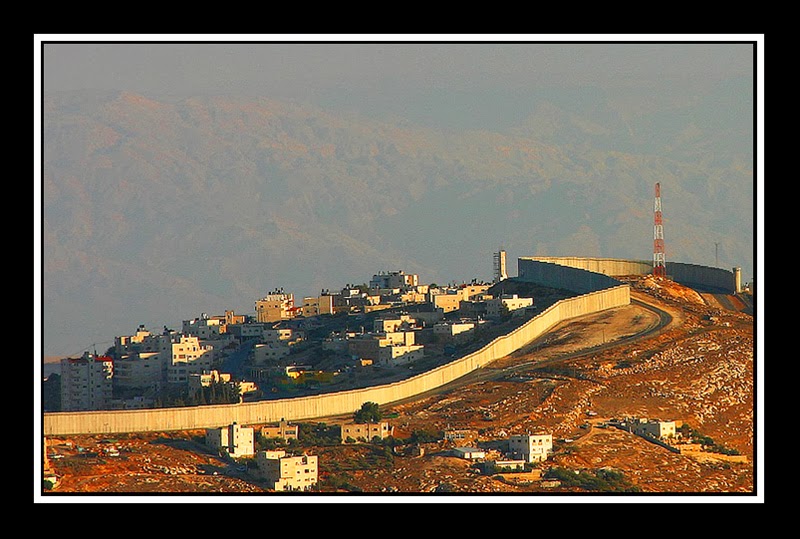 My husbands hometown was cut in half by the wall. Neighbors were deemed the enemy because of a line drawn by the government. 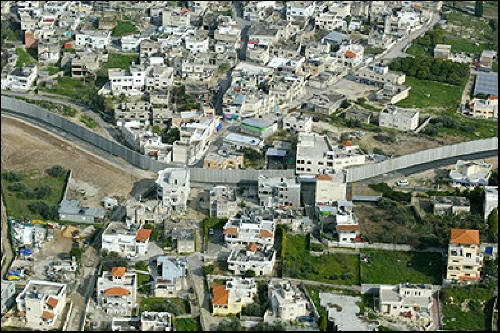 We drive along side the Wall daily as I take my husband to work. To see it from my front window and see military vehicles patrolling our neighborhood looking for any mischief. How can you have this 30 foot (10 meter) wall that divides one city from another?  Israel is safer for it, but it just sucks.

Third is the fact that my husband had to hide the fact that he is Arab from his potential employers in order to get a job. One asked where he lived and he flat out told them. They never called back after that.

Fourth. When I am standing at a gymnastics competition and they have everyone stand and they play the national anthem. I feel such emotional turmoil behind that music. Because of the people who make up Israel. The Jews who escaped such horrors of WWII and because of my mother and father in law who were kicked off their land that had been in their family for hundreds of years to make room in a so called barren land.

Fifth is the filth. As I mentioned above it's only found in Arab villages. 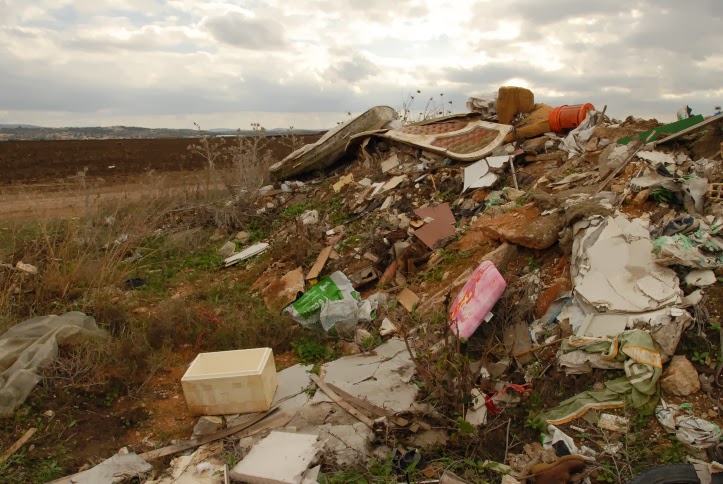 Once you get into a Jewish area, it's clean, well maintained and has sidewalks. Why? Arabs pay their taxes just as much. They don't have parks or green areas. Things are constantly half done. Garbage everywhere. Broken furniture left on the side of the road...

All in all, living in Israel really does not feel THAT much different than living anywhere else. Especially if you can stay out of the politics. =) When we are asked why we left America to live in Israel, we answer why not? You live here don't you? It must be ok.

Now THAT is an inside picture of what life is like in another country. Most times all you read or hear about from travelers is the tourist areas or the food. You almost never hear of what day to day life is like for someone living in a foreign country. Seems like it can be a major pain in the arse about many things, but there are also things you do like about it. There will always be good and bad. Good to hear both sides of life there. Keep up the great blogging!