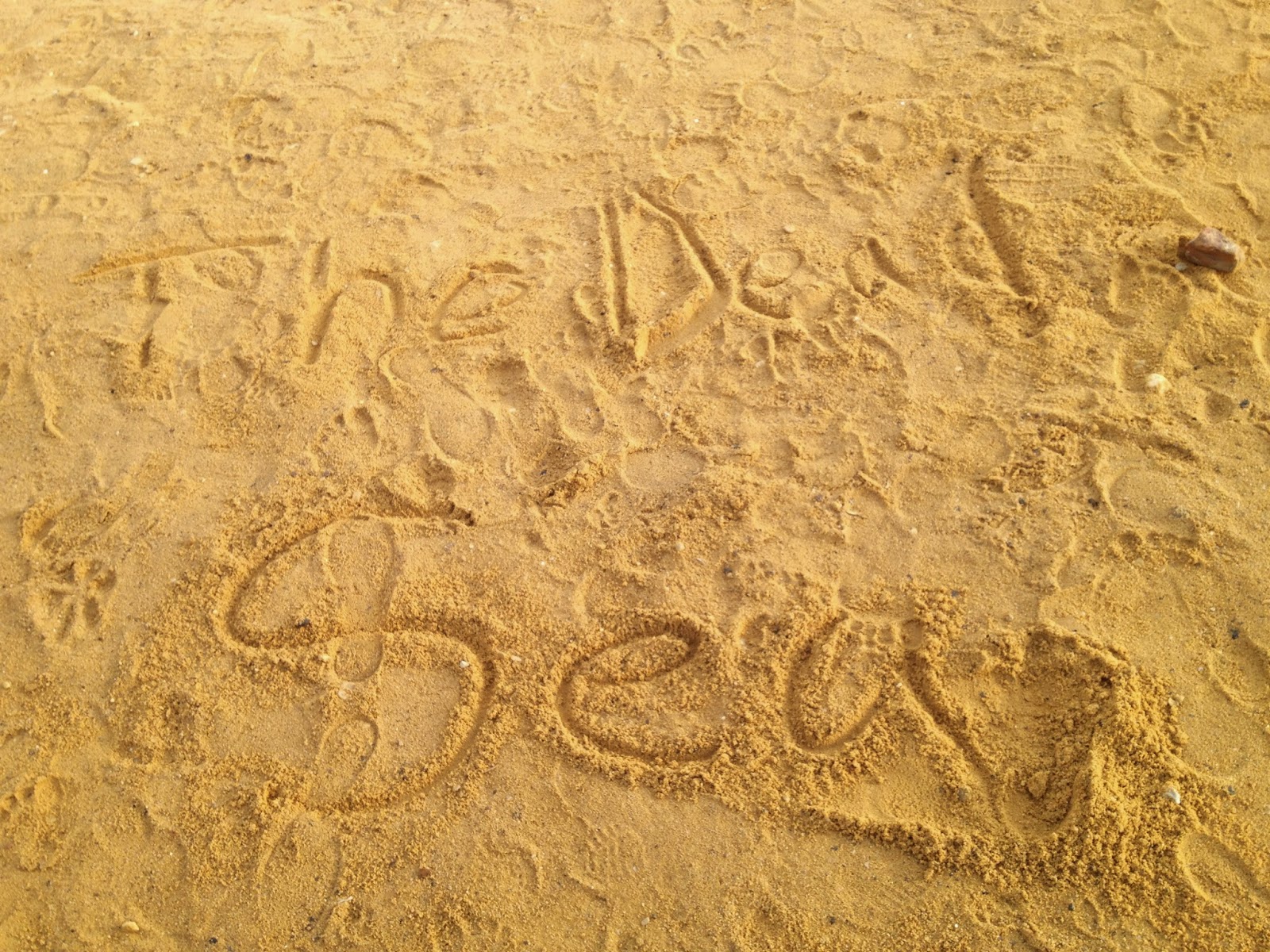 Last week after mentioning to Lena that we might be going to the Dead Sea, she asked me if I had a Bucket List. You know, those popular lists that people make of things they want to do in their lifetime. I honestly don't have a Bucket List, but if I did, going to the Dead Sea would have been on it.
I have been to Israel 3 times before we moved here. Each time family members asked if we wanted to go to the Dead Sea. Every time I was either sick, or it was unGodly hot and the thought of going to the lowest place on Earth didn't sound very appealing.
Our "Minister of Tourism" Abed once again led us on our foray into the desert. The night before we left we ran around buying sleeping bags and tents, packing food and anything I thought we might need on this overnight camping trip.
Yes. I camped. I do not like to camp. Camping to me is sleeping in a cabin and having to use the public toilet. Not sleeping on the hard ground and having to pee by the dumpster at 3am because there are NO public toilets open, no porta potties, no buckets to be emptied on the sly in the morning.
There are several roads to get down to the Dead Sea. Abed wanted to avoid the Toll Freeway, as he was using his company car and didn't want it to show up on the bill. This added a little extra time to the trip, but we went along with it. We also made it clear that I did not have my passport and did not want to travel through the West Bank.
I had looked at mapping options the night before and tried to figure out what route we would take other than Highway 6 (Toll road). There is a road that takes you through Jerusalem and then through the West Bank and down along the Dead Sea. I figured he wouldn't take this as we requested no West Bank.
As we were passing through Jerusalem we came to a "Security Check Point". Jay and I kind of looked at each other and asked ourselves "Are we going into the West Bank?". There are no signs that state YOU ARE NOW ENTERING THE WEST BANK. So if you are a traveler like me, you would have no idea that you are going there. No one stopped us to check ID's, or asked any questions, so we just drove on. The West Bank doesn't really look any different than Israel after all.
As we were nearing the Dead Sea, we came to a small town that was a little touristy, complete with Camels! Zane went INSANE! We HAD to stop and ride one!! SQUEEEEE!!!

The ride cost 20 ILS, which is just under $6. The excitement was a little too much for Zane, and this happened shortly afterwards.


The drive through the Desert was a long and boring one. The Dead sea is broken into 2 separate area's. The Large part has no beach access and is surrounded by sinkholes and barbed wire. I guess the water level has gone down and separated it into two separate bodies of water. Some older maps show it as one body of water. 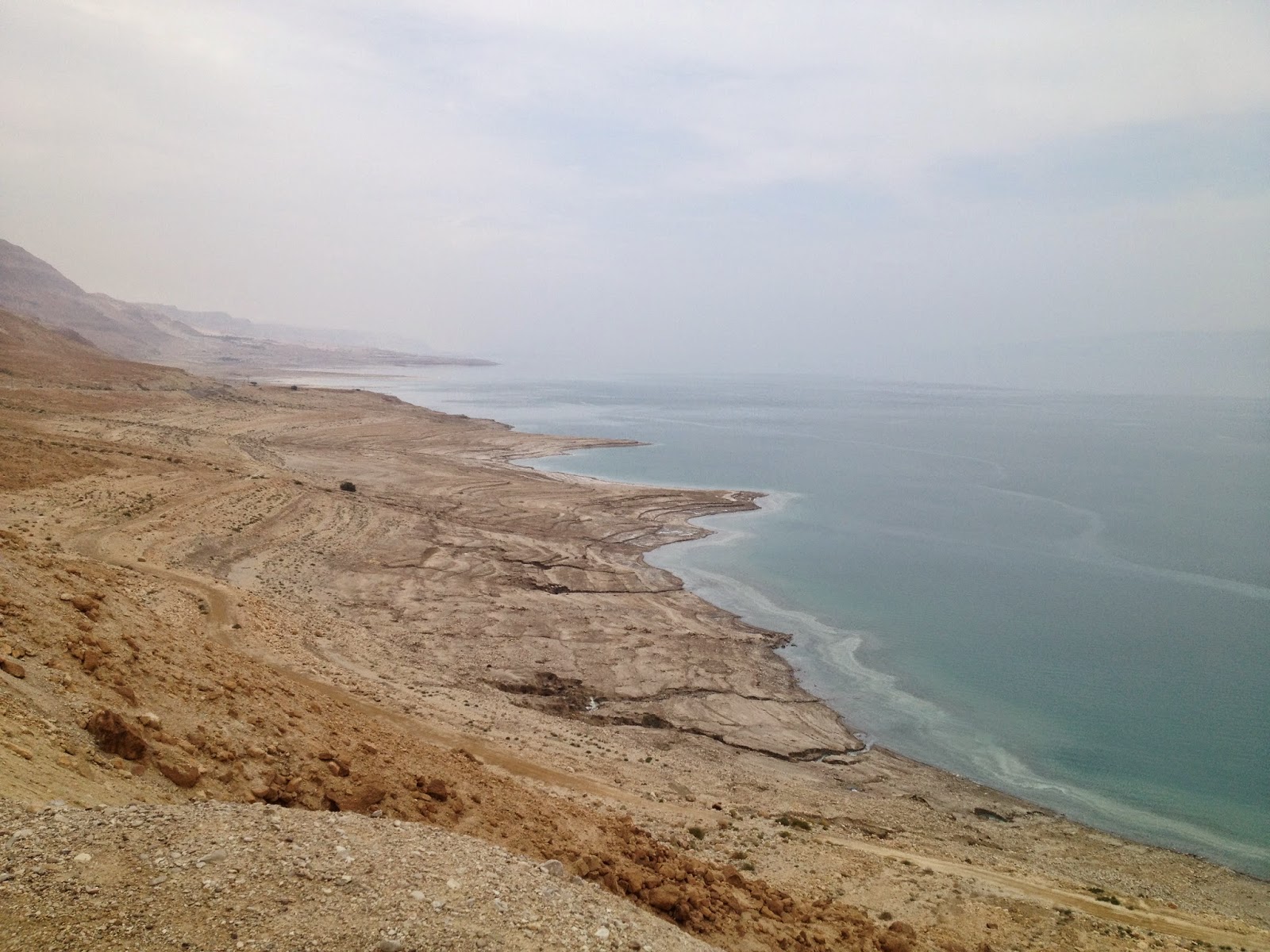 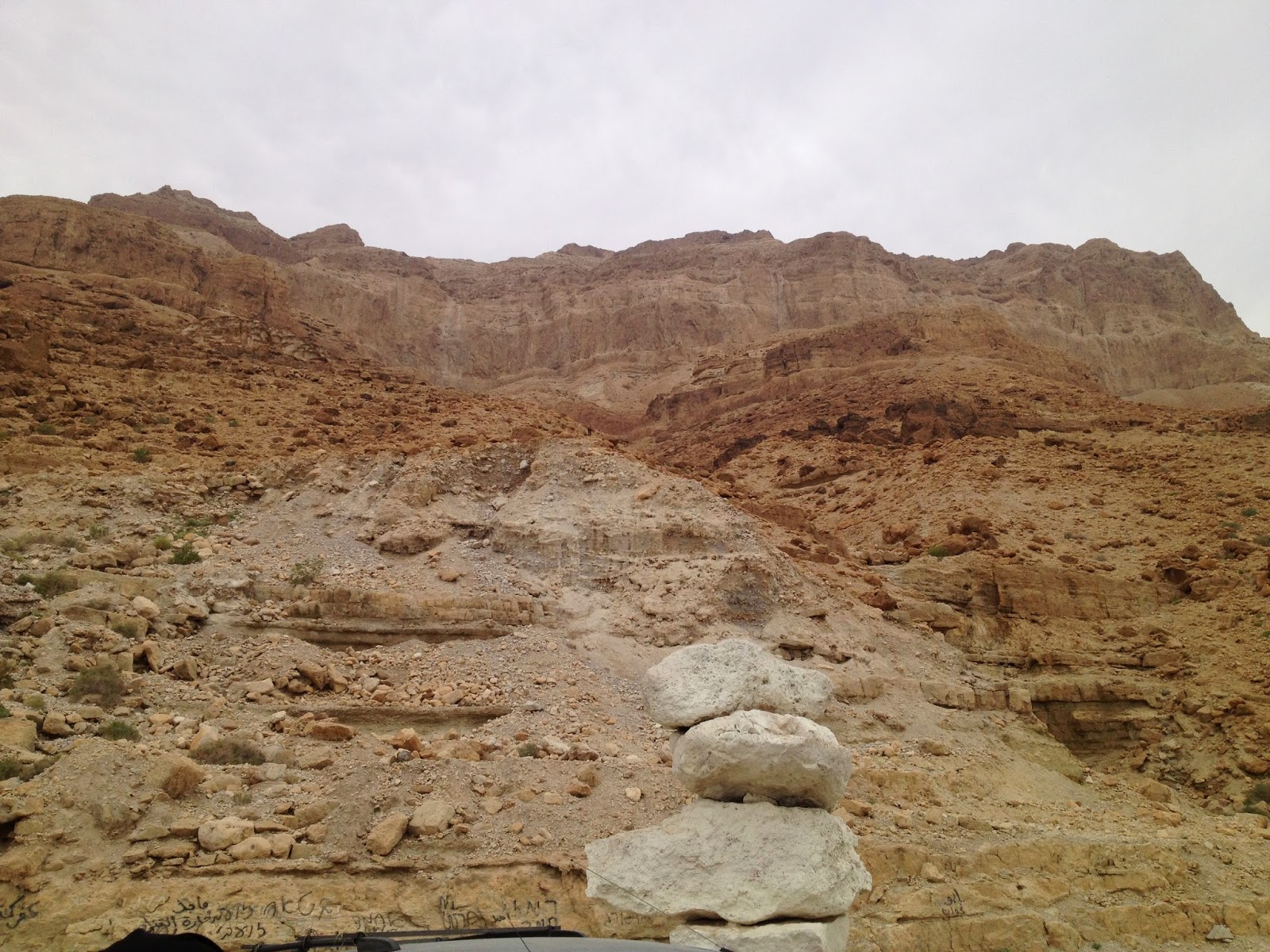 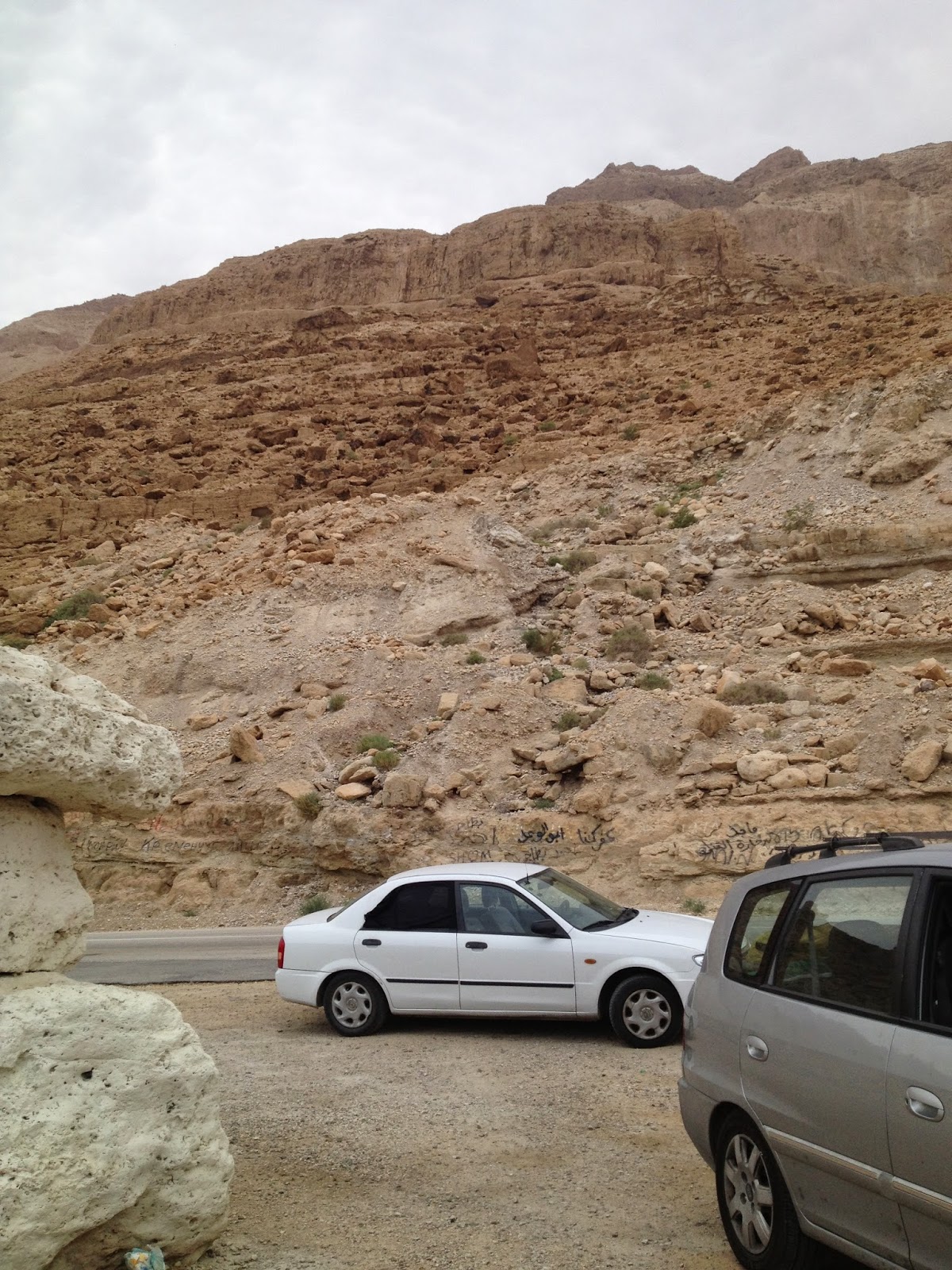 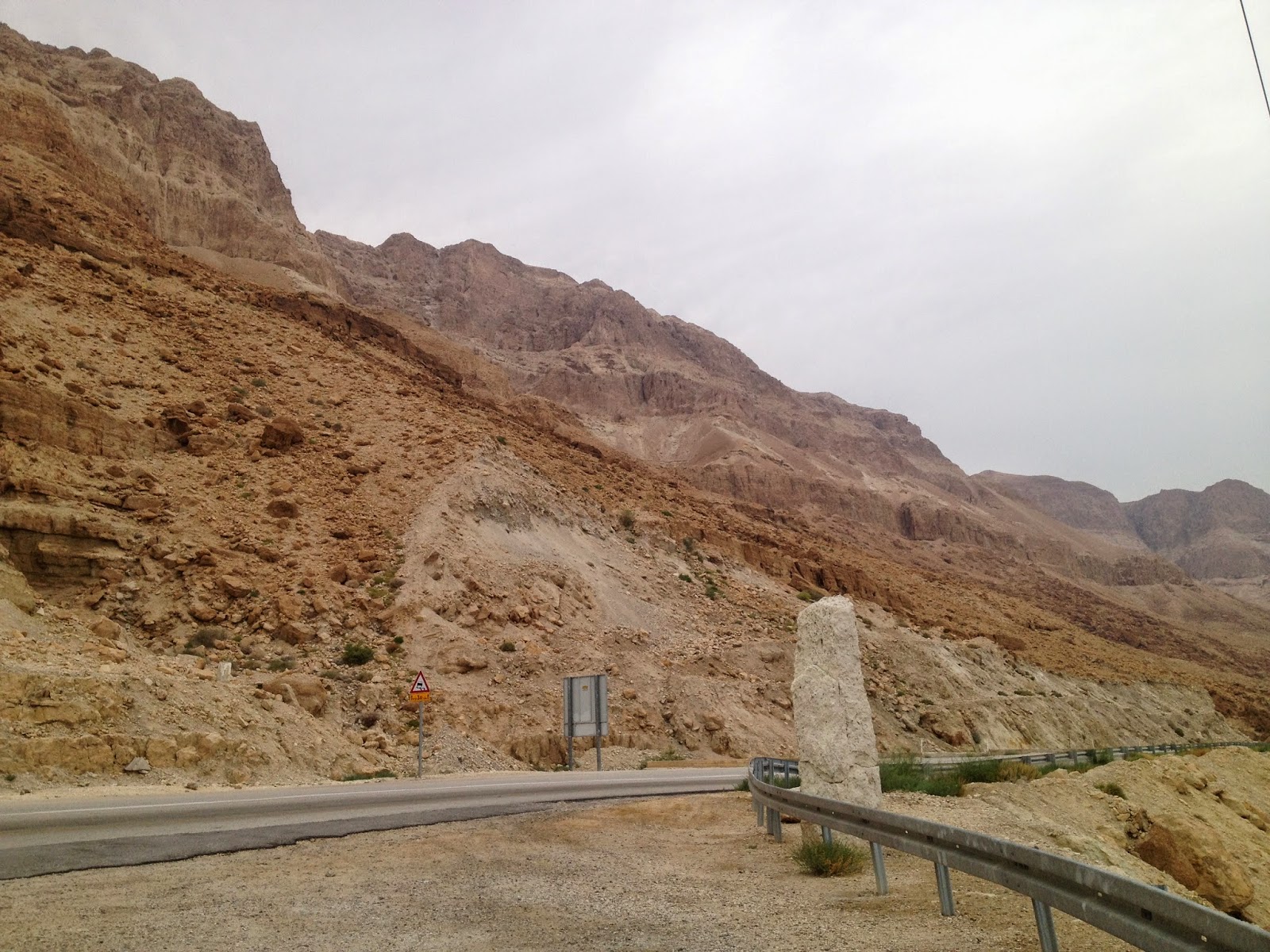 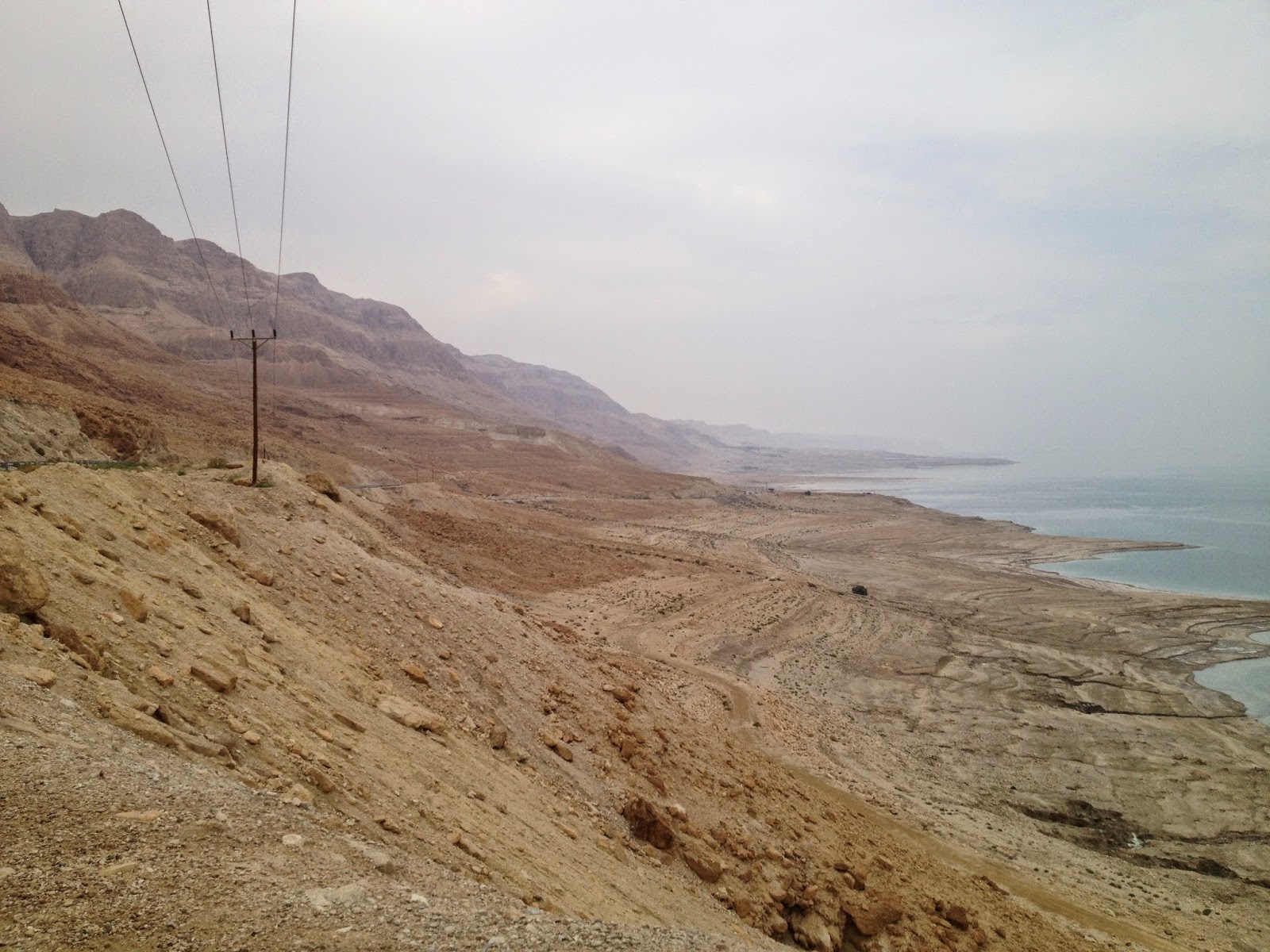 When we finally arrived in Ein Bokek it was only 30*c (86*f) it was very comfortable. I think it did reach 32* at one point, but we were very lucky to go when it wasn't unbearably hot. The sand is terrible. It's very rocky and sticks to you like crazy. You could never get all the sand off of you, unless you were IN the water... We unloaded our cars and the guys went hunting for a spot to put our stuff and possibly pitch the tents.
We wanted to get one of those sheltered area's but they were full at the time. So we just dumped our stuff, changed and jumped into the water. At first it doesn't seem any different. Until you get out to just past your armpits and the water starts lifting you. It is the strangest sensation! It's like you have a life jacket on or pool noodles. It took a lot of getting used to. You kind of panic at first when you lean back just a little, your legs rush to the surface. There are signs with guidance directions all over. 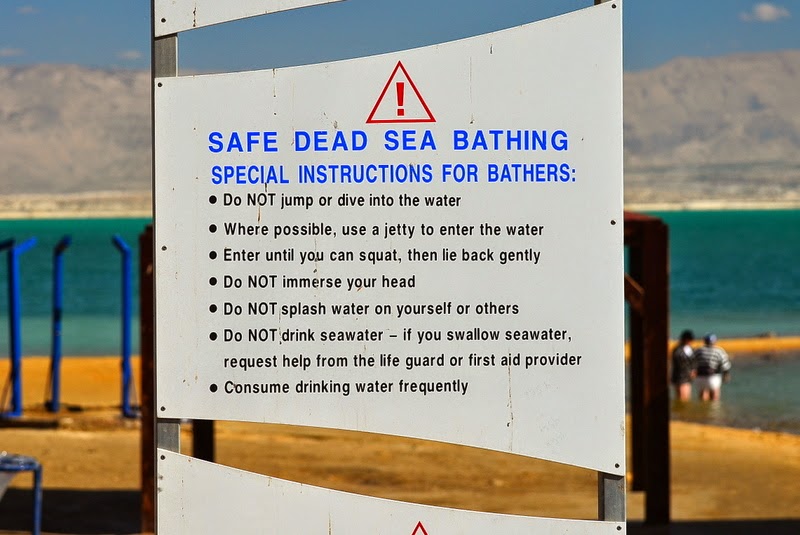 Trust me. Salt water is NOT your friend. Our lips were burning from it. The pain if you got a droplet in your eye!!! And the taste! UGH! Needless to say, we were very careful about not splashing.

The first time my legs floated up, I panicked. You can't figure out how to get your legs back down. The usual tricks used in pools don't work too well when you are buoyant. 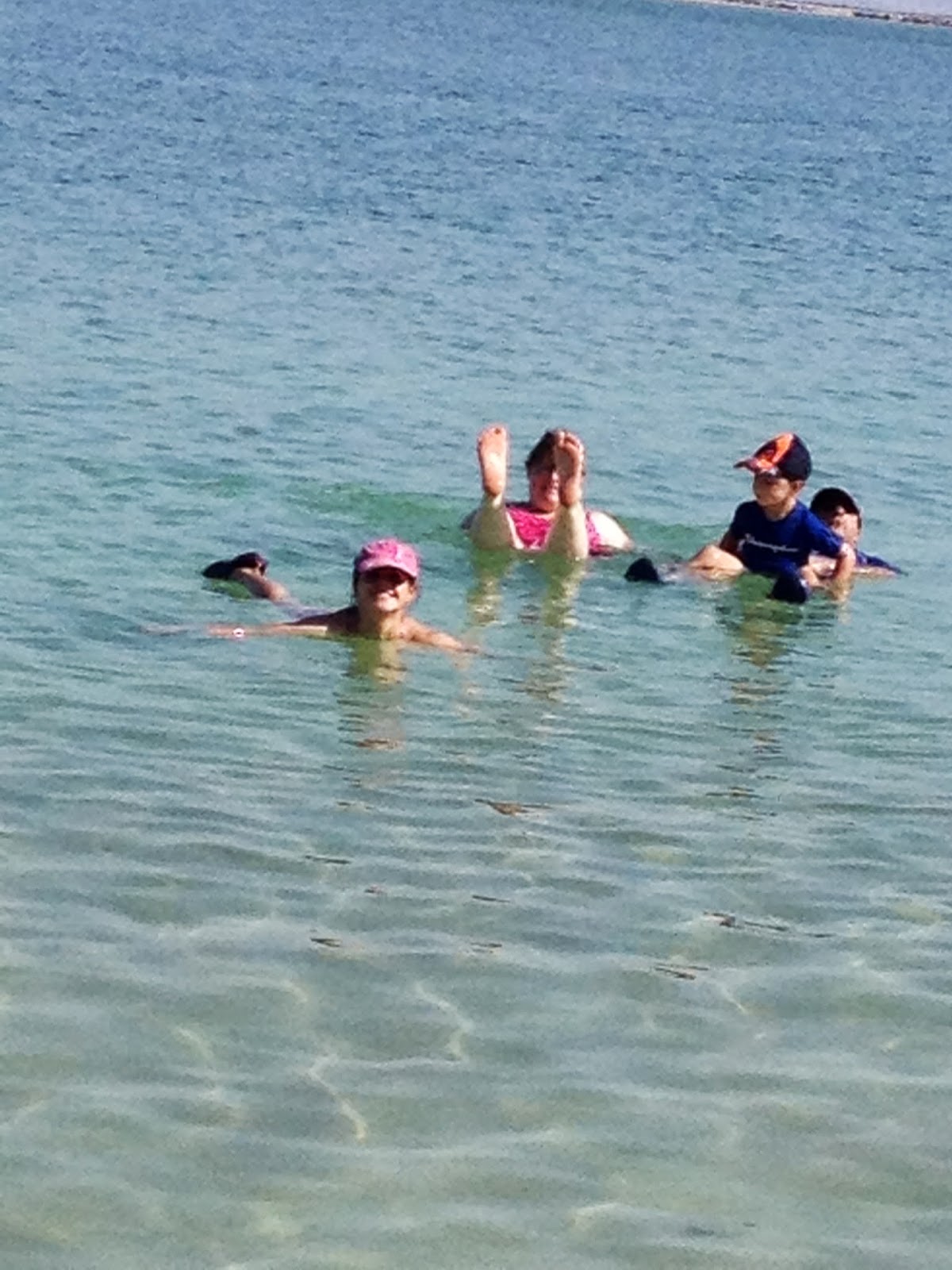 Soon a group moved on from their sheltered area and we moved in, setting up camp. We purchased a 6 person tent. HA! maybe if you all weigh 100lbs and don't want to move? It fit 3 across with Jay stretched across the end.

We BBQ'd that night, enjoyed music from our neighbor and paid our 5 shekels to use the toilet inside the tourist center. 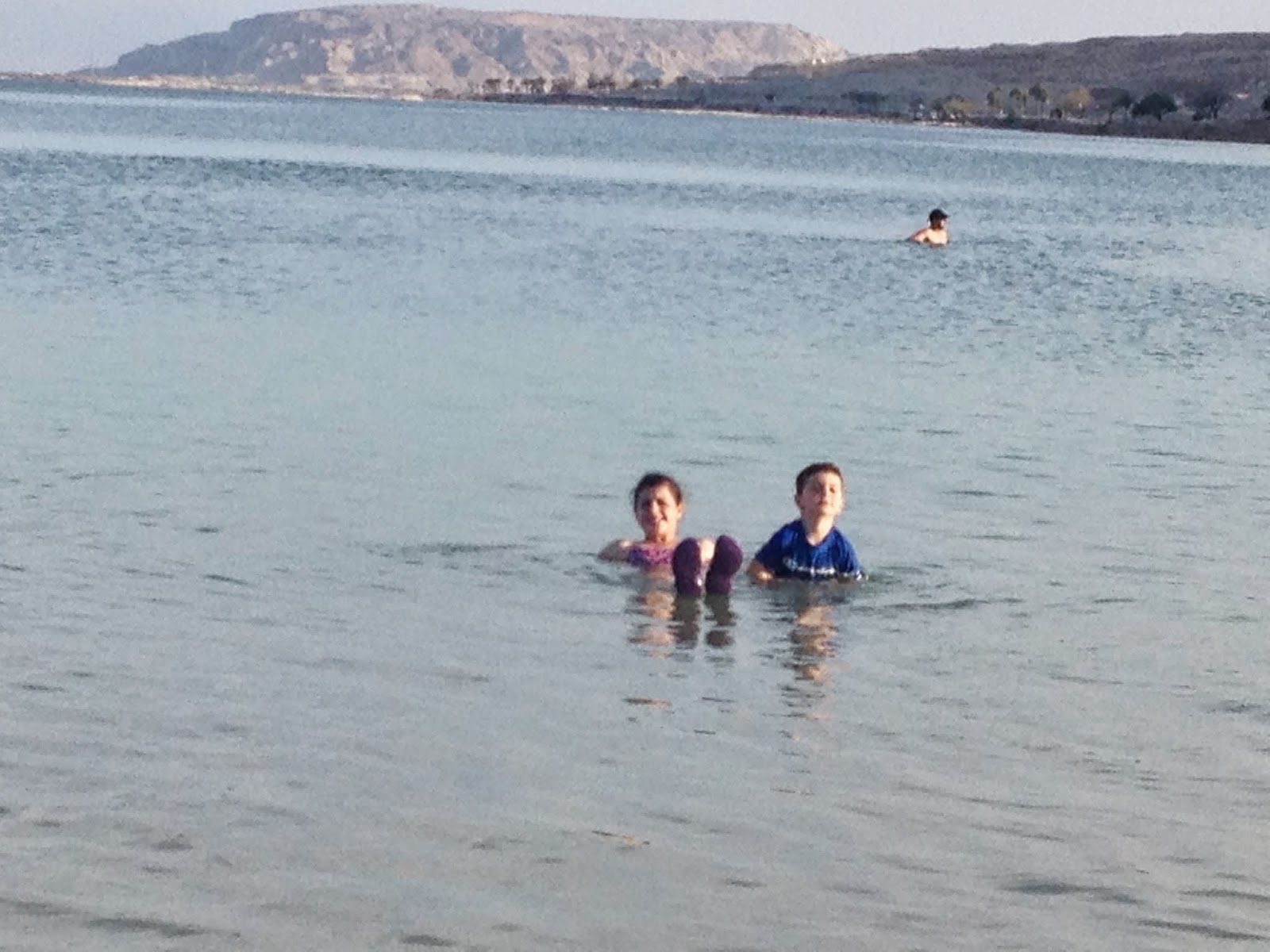 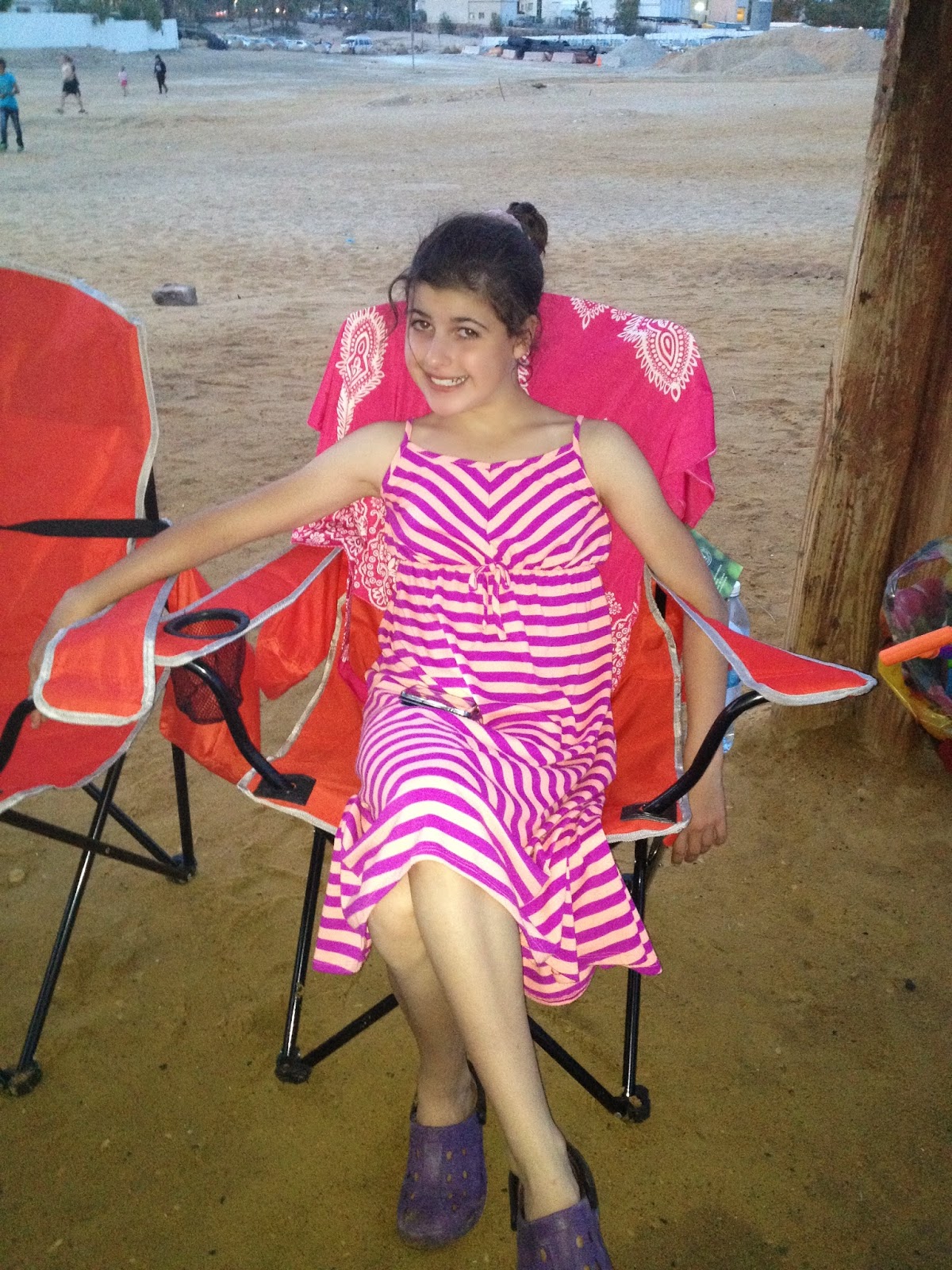 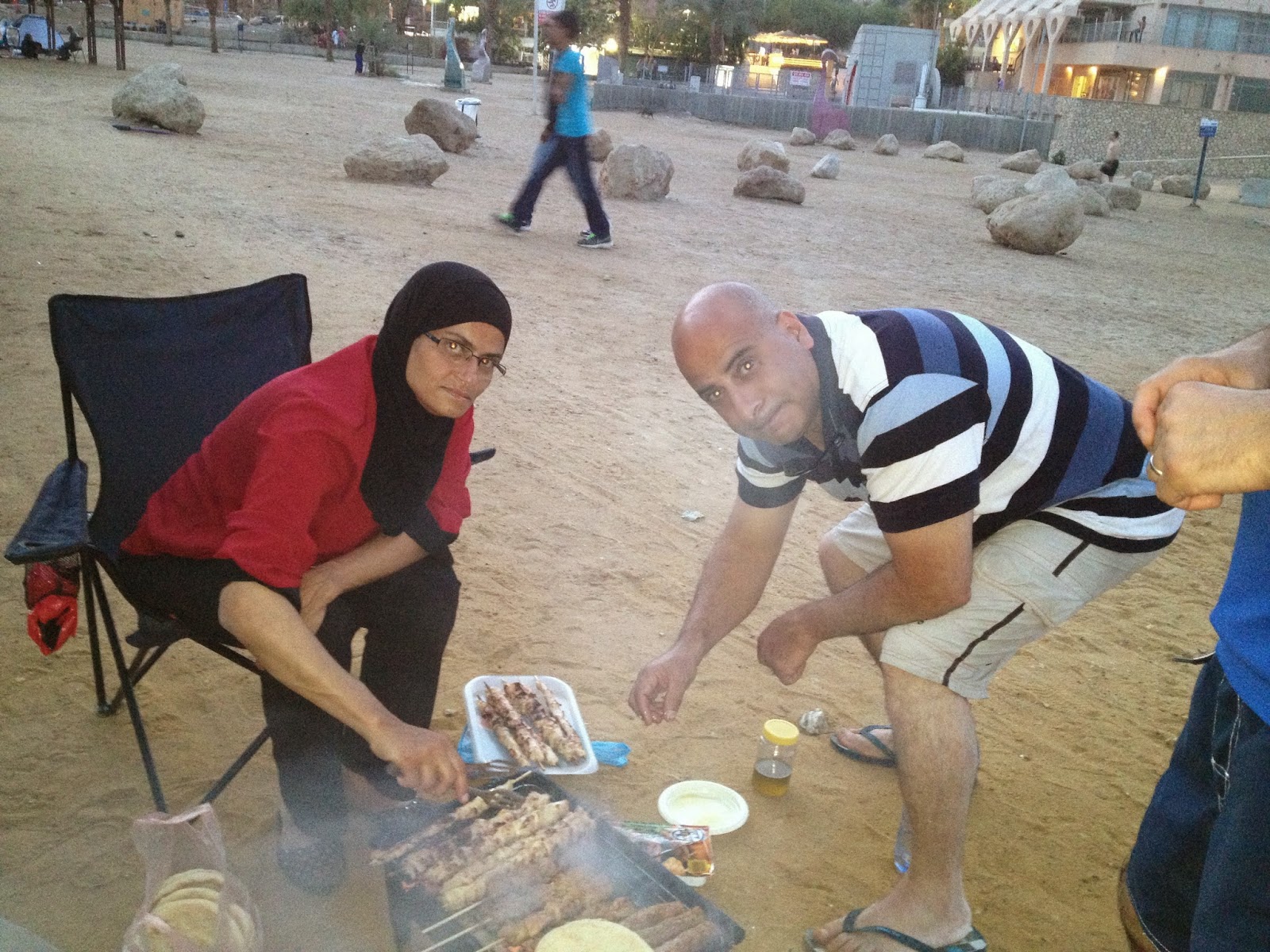 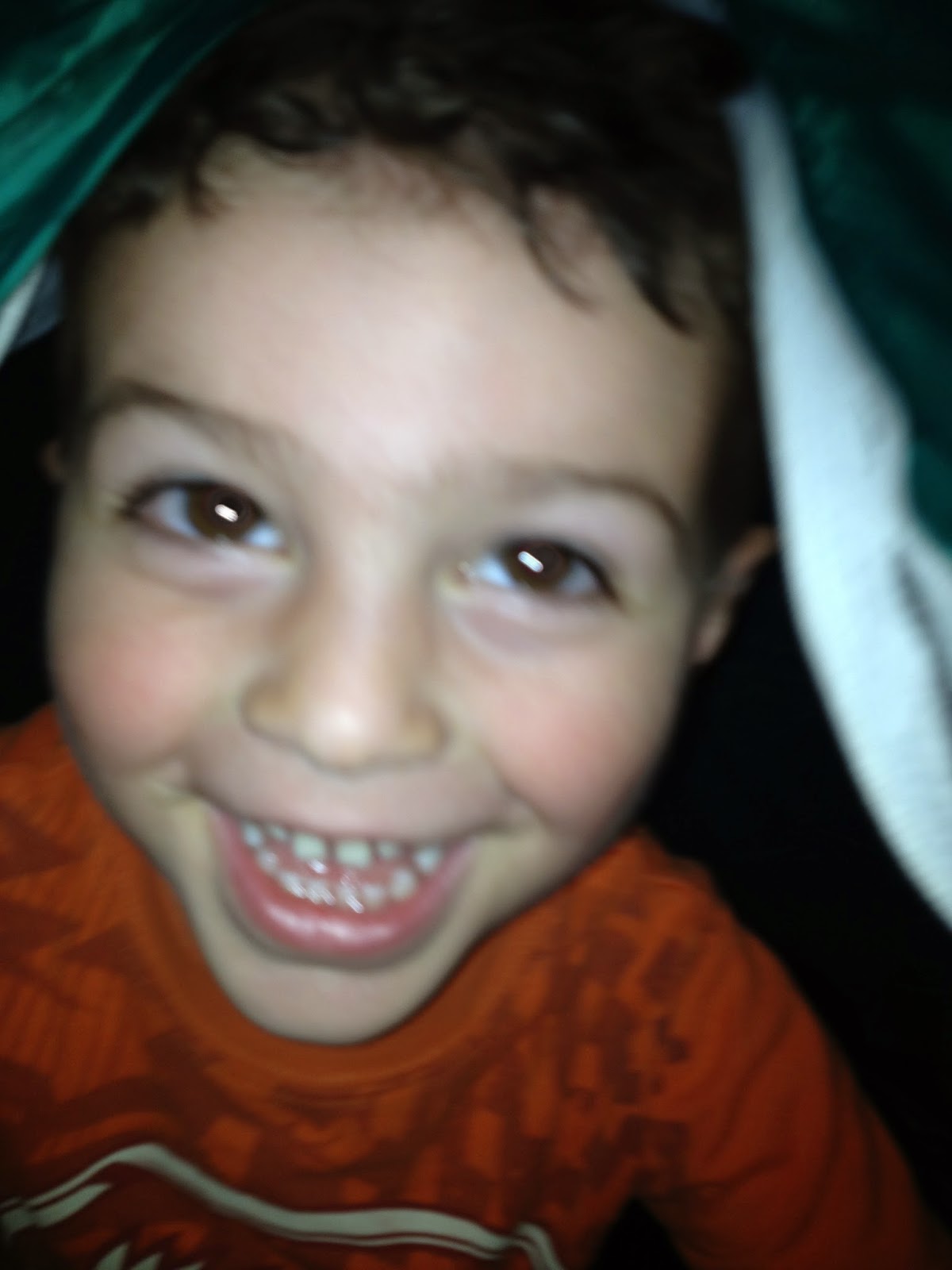 As the night approached more and more people moved in to camp overnight, or as one group decided, to party. All.Night.Long. It was still quite warm as we headed to bed, but as the night went on a wind kicked up and cooled it nicely. Around 3:30 we all woke up and needed to pee badly. As I mentioned before, no where to pee officially. So we trecked off to the dumpster and added our mark. Poor Jay did not sleep a wink that night. I think he finally fell asleep around 5 and got up with the rest of us at 7:20. Lena woke up at 6, joining Abed to watch the insane tourist group from the Phillapines screaming and shouting as they frolliced in the water at sunrise.
We ate our breakfast and went swimming for a few more hours. We really got the hang of floating by then. Oh, I forgot to mention that the salt water burns the crap out of anything newly shaved. Our legs were burning with little bumps all over, Jay's neck was bright red and a few other body parts were feeling the sterilization of the salt water.
Around 12:30 we packed up and loaded the car for the drive home. Abed assured us that this alternate round would be shorter and easier. HA. The road took us straight through the West Bank.We really didn't realize this until we were stopped at a checkpoint and asked for our ID's. I handed over my Drivers License and explained that we were coming from the Dead Sea and Jay's ID was in the trunk. We were asked to show it. When I opened the trunk and had to pull out sleeping bags, and coolers, she realized that we were telling the truth and honestly had no idea we were in the West Bank and let us on our way after asking Jay a few questions,without having to unpacking the entire car for a piece of ID.
The "shorter" drive home took just over 3 hours. 30 minutes longer than going down.
Next time we will take the 6 and call it a day.
Jay has some great pictures on his phone, but he is at work. I will try to download them later.
And to answer the question of why we didn't stay in a hotel? The rooms that were available were about $260 a night. It doubled the day of our arrival to $550 a night. Thanks, but no thanks.
And even though I personally am not a camper, please do not let this derail you from visiting the Dead Sea. It is a very unique experience that everyone should have the chance to encounter at least once in their life!